Four SiO2 films with different thicknesses (0.4, 0.8, 1.3, 4.2 nm) on silicon wafers were analyzed by Fourier Transform Infrared Spectroscopy (FTIR).
The peaks near 1,250 cm-1 and 1,065 cm-1 shift toward the low-wavenumber side as the thickness of the oxide layer reduces. 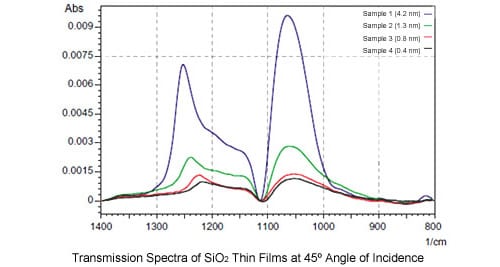 An FTIR spectrophotometer is mainly used to estimate the structure of organic compounds.
This instrument shines infrared light onto the molecules, which absorb infrared radiation equivalent to the interatomic vibrational energy of the atoms comprising the molecules. It then estimates the structure and quantifies the compound by investigating this IR absorbance.