Olive oil is presently among the few food products whose sensory attributes are officially regulated and are used to classified the oils into three categories (determining its economic value) namely extra virgin (EVO), virgin (VO), and lampante oil. Sensory assessment is carried out by highly and permanently trained panelists through well-standardized protocols, in which the evaluation of the intensities of specific defects and the intensity of the "fruity" perception are required.

Strong efforts have been dedicated to unravel the volatile composition to understand correlations with quality attributes and make the sensory approach more objective. The volatiles profile and intensity depend on several parameters (i.e. geographical origin, cultivar, fruit ripeness, processing practices, and storage), most of which concur to determine the green and fruity perception, while the presence of defects is mainly due to inappropriate manufacturing and storage practices.

The main codified defects can be classified into two main classes: I) originated from inappropriate storage of olives before extraction, which may lead to mustiness or mold, winey or vinegary, and fusty defects, due to aerobic and anaerobic fermentation; II) originated from inappropriate oil storage conditions, which may lead to muddy (due to excessive contact of the oil with sediment in tanks) and rancid (due to auto-oxidation process) defects.
The present work aims at implementing advanced elaboration tools to the data obtained by a head space (HS) solid phase microextraction (HS-SPME) sampling technique follow by GCxGC-MS. The final aim is to characterize the fingerprint of defected and high quality EVO to support or even replace the sensory evaluation.

Five defected oils, used as reference, were provided by the International Olive Council. Additional 14 samples were purchased in a supermarket and evaluated by an Official Panel located in Italy. The SPME devices and fibers were from Supelco (Bellefonte, PA, USA). A Divinylbenzene/Carboxen/Polydimethylsiloxane (DVB/CAR/PDMS) df 50/30 μm, 2 cm length fiber was chosen and conditioned before use as recommended by the manufacturer. SPME extraction procedure was carried out by exposing the fiber to the oil sample headspace (2.000 g) at 50°C for 40 min and subsequently introduced into the GC injector for thermal desorption for 10 min at 250 °C in splitless mode. Samples were analyzed in duplicate.

Configuration of the instrument

GCxGC undoubtedly is a strategic choice, able to provide highly detailed, sensitive and structured 2D pattern that acts as a peculiar sample signature for chemical fingerprinting. The resulting chemical pattern of virgin olive oils is quite complex and the identification of an unequivocal sample fingerprint for sensory quality assessment is cumbersome. Volatiles that contribute to the whole aroma belong to several classes, mainly aldehydes, ketones, alcohols, esters, hydrocarbons, furans, lactones. The extrapolation of sensory-relevant compounds is challenging since abundant analytes may be characterized by a low sensory perception. Therefore; it is important to combine both information, namely analyte amount and its odour threshold (OT). Therefore; the sensory quality of each sample was evaluated, after characterization of the most discriminant peaks, by dividing the peak areas by the OT, and then performing a Principal Component Analysis (PCA). 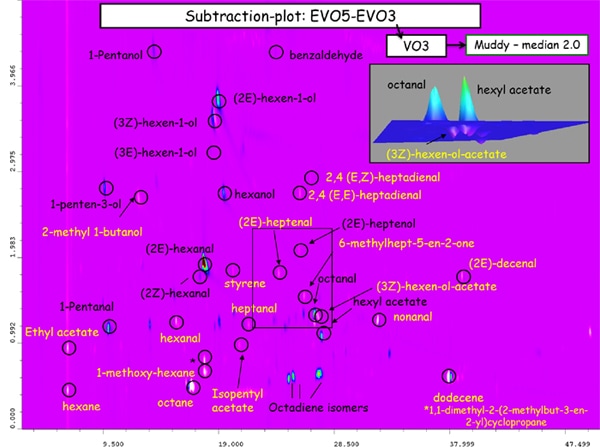 Figure 3.1. Subtraction-plot of an extravirgin olive oil and a defected oil obtained using the ChromSqaure software.

The visual comparison tool of the ChromSquare software, which performs a pair-wise subtraction, was adopted in this study, which was used as a support for the 2D pattern recognition and discriminant peak finding. Each reference defected standard oil was pair-wise compared to authentic EVO samples to localize relevant discriminating peak features across patterns.
Figure 1 reports A) a subtraction-plot, with discriminant compounds highlighted in yellow and B) the same plot with the peak identity replaced by the sensory perception of the discriminant compounds. 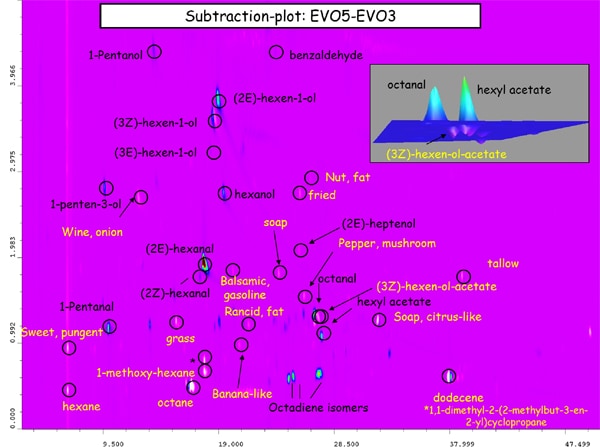 The data obtained was used to perform a PCA. A very powerful discrimination was obtained (Figure 2). All the samples described as EVO or slightly rancid clustered together. Such cluster includes EVO-1, EVO-5, EVO-8, EVO-10, EVO-11, EVO-13, and EVO-14, and it is characterized by well-known aroma compounds carrying the green note, mainly deriving from the LOX pathway, namely (2E)-hex-2-enal (63), (3Z)-hex-3-enal (45), (2E)-hex-2-en-1-ol (68), pent-1-en-3-ol (15), and pent-1-en-3-one (14). Another group includes fusty and muddy samples, namely EVO-3, EVO-6, EVO-7, and EVO-4 (which presented also the vinegary defect). Among such samples the fusty/muddy defect was perceived more intense in the sample EVO-3, which is indeed located closer to the IOC standards. EVO-9 is located between the cluster of EVO and the fusty and muddy defects, and indeed the internal Panel perceived it as slightly fusty. EVO-2 has been described as rancid and mouldy, while EVO-12, was perceived as highly rancid, and it is actually located very close to the corresponding defect. It is interesting to highlight that most of the compounds reported in the literature as responsible for the regulated defects, mainly discriminate IOC defects from the VO and EVO sample, while few other compounds are responsible for the discrimination between EVO and VO (occurring mainly on the F3 axe). Therefore, it can be stated that, although the study of reference defected samples is important to understand any phenomenon, a more “comprehensive” sampling (including slightly defected oils and real-world samples) gives more realistic pictures facilitating the identification of relevant analytes responsible for a particular perception.