From early on, the effectiveness of green tea on health has attracted attention. In particular, it has been reported that catechins, the astringent taste component contained in green tea, in large amounts of about 10 to 15 % , are effective in lowering cholesterol in the blood and body fat, in preventing cancer and have an antioxidant effect. As such, much research is being conducted into catechins. Catechins are gaining increased attention since recent research also reports that they are capable of preventing dementia.
Green tea leaves contain four types catechins, each with differing chemical structure: epicatechin (EC), epigallocatechin (EGC), epicatechin gallate (ECG), and epigallocatechin gallate (EGCG). Heating during the tea beverage manufacturing process also causes its structure to change, part of which is transformed into catechin (C), gallocatechin (GC), catechin gallate (CG), and gallocatechin gallate (GCG), respectively. Catechins are a type of polyphenol, with several thousands of structures that are said to exist in plants. HPLC (High Performance Liquid Chromatograph) and LC/MS (Liquid Chromatograph-Mass Spectrometers are effective in separating and detecting catechins dissolved in water. (For analysis examples performed by LC/MS, click here.)
The following shows an example of a commercially available green tea beverage measured by an Ultra Fast Liquid Chromatograph. After diluting with deionized water to a ratio of 4:1, the solution was filtered with a 0.22 µm membrane filter.
The analysis time was greatly shortened by measuring with an Ultra Fast Liquid Chromatograph. 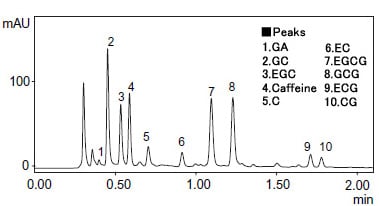 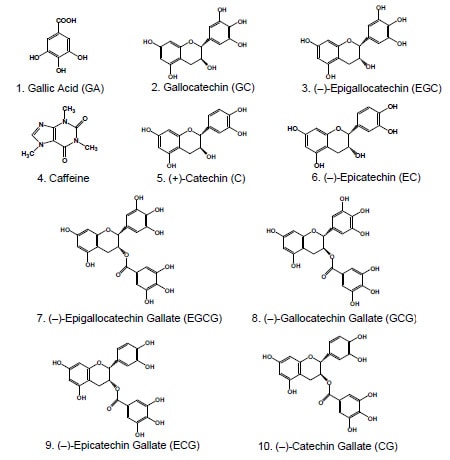 On the HPLC, liquid is passed through the flow lines of the analytical unit, and the sample is then introduced into a separation tube called a "column" where it is separated into its components. The amounts of components are measured by a detector. On the Ultra Fast HPLC System UFLC, combined use with a high-speed high separation column ensures that analysis times can be shortened to 1/10 that of general-purpose LCs without compromising high separation and reproducibility.