Catechins are a type of polyphenol, several thousand varieties of which are said to exist in plants. HPLC (High Performance Liquid Chromatograph) is effective in separating and detecting catechins dissolved in water. (For examples of analyses performed by HPLC, click here.) High mass selectivity can be obtained when a mass spectrometer (MS) is used as the detector for the HPLC.
Eight catechin components in a green tea beverage were analyzed by LC/MS (Liquid Chromatograph-Mass Spectrometer).

The following shows an example of high-speed analysis of eight catechin components in a green tea beverage. 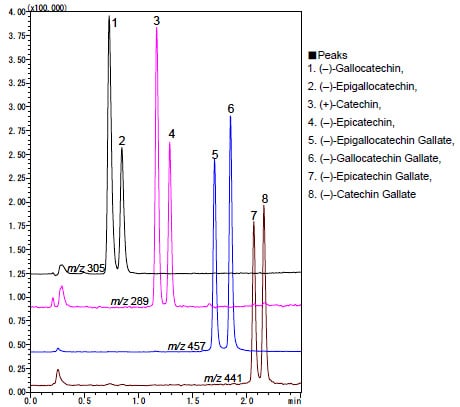 Deprotonated molecular ions [M-H]- can be detected for catechins since protons are removed from catechin molecules in negative mode electrospray ionization (ESI). With conventional analytical methods, about 20 to 30 minutes was required for each analysis. However, the analytical time can now be shortened to 2.5 minutes per analysis with the use of Prominence UFLC and the high-speed Shim-pack XR-ODS (2.2 µm particle size) semi-micro column. An internal diameter of 2 mm is well suited for LC/MS.

This system incorporates both a Mass Spectrometer (MS) and a High Performance Liquid Chromatograph (HPLC). Samples can be separated and displayed as a set of peaks by passing the sample through a narrow separation tube, called a column, in the LC unit. The mass spectrum of each peak can be reviewed, and thus the molecular weight of each component verified. The compounds can be quantified by comparing the area under each peak with that of a reference standard. This enables volatile or thermally unstable compounds, components that are problematic on a GC/MS, to be analyzed.