Fatty acids (FAs), either of vegetable, land or marine animal origin, usually consist of straight-chain, saturated or unsaturated, even-carbon-number carboxylic acids. Generally, chain lengths do not exceed C24, while double bonds (DBs) are in the cis configuration. It is a well-known fact that odd-numbered FAs are generated by many microorganisms and are synthesized, in a limited manner, in animal tissues, such as fish oils.
Single-column GC has been the most common method used for the determination of FA profiles. To analyse these lipidic constituents, it is necessary to transform them into more-volatile and less polar analytes, such as methyl esters. There is a widespread use of 25–30 m columns, with a polyethylene glycol-type stationary phase, for the separation of the most important saturated and unsaturated FAs. However, it will be demonstrated that single column GC can fall short in the full unveiling even of simple lipid profiles.
The present investigation is focused on the use of cryogenically-modulated comprehensive 2D GC (GC×GC), combined with a rapid-scanning quadrupole mass spectrometer (qMS), for the elucidation of a highly complex fatty acid sample, namely cod liver oil.

The cod liver oil was purchased in a chemist located in Messina (Italy).
The sample was stored at 4°C prior to analysis.The fatty acid methyl esters (FAMEs) were prepared as follows: 1 mL of a 10% v/v solution of concentrated H2SO4 in MeOH was added to 1 mL of oil, then heated at 110°C for 2 h in a closed vial. After cooling, the FAME phase was separated from the acidic solution.

In general, the main limitations that can be encountered in the conventional GC-MS analysis of complex lipid samples are: I) if a GC-isolated FAME is introduced into the MS ion source then the identification of positional isomers can be problematic: e.g., the mass spectra of C18:3ω6 and C18:3ω3 are very similar; II) another limitation, related to the GC step, is that the number of FAMEs contained in these sample types exceeds the resolving power of a conventional polar column; III) a further issue is that many trace amount constituents, on a conventional capillary, reach the detector at very low concentrations and remain undetected. Such drawbacks can be almost entirely avoided through the use of GC×GC-qMS.

The GC×GC-qMS chromatogram of a sample of cod liver oil FAMEs is shown in Figure 1; apart from the extreme complexity, it can be observed that the FAMEs are situated within a diagonal band that widens gradually across the chromatogram.
Considering one of the advantages of GC×GC, specifically the formation of group-type patterns of homologous series of compounds, it can be seen that: 1) methyl esters are grouped in specific locations of the space plane in relation to their carbon number (the C14-C24 zones are indicated by arrows); II) FAMEs tend to align themselves along distinct bands on the basis of their double-bond (DB) content, specifically, seven bands in the DB0-6 range; 3) ω-defined methyl esters (e.g., ω3: C20:5-C20:4-C20:3) are located along descending diagonal bands. Overall, 82 compounds were identified through MS database matching and specific 2D locations (Table 1).
For example, it was rather simple to identify peak 47 as C18:2ω3 because it was located at the intersection point of the DB2 band and of the ω3 diagonal.
Finally, with regard to another GC×GC advantage, namely re-concentration through cryogenic modulation, several trace-amount FAMEs were determined. A series of unexpected, odd-numbered saturated (i.e., C9:0, C11:0, anteiso C19:0, etc.) and unsaturated (i.e., C19:4ω6, C21:4ω6, C23:3, etc.) fatty acids were determined at very low concentrations 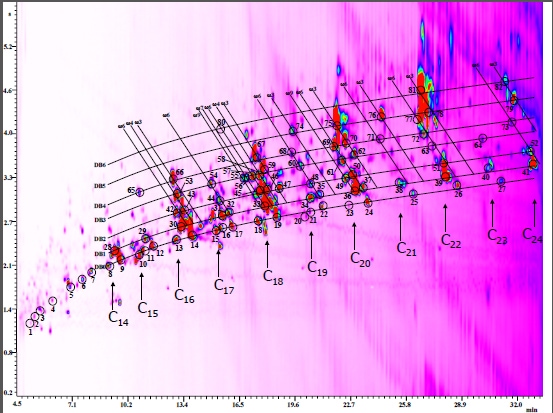