As foods are mixtures of various compounds, qualitative analysis of the components requires a separation stage by high-performance liquid chromatography (HPLC) or gas chromatography (GC).
An example of compositional analysis of foods by preparative LC-FTIR is introduced below. Red wine was filtered through a membrane filter and injected into an HPLC. The isolates at peaks A to C were sampled and the IR spectrum measured using the diffuse reflectance method. 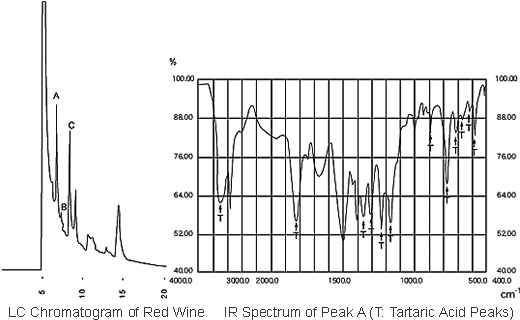 The IR spectrum of peak A is shown at the right. Despite the superimposed absorbance of coexisting compounds, the tartaric acid peaks (T) are plainly discernable.

The qualitative analysis of food components requires a separation stage by high-performance liquid chromatography (HPLC) or gas chromatography (GC). Due to column load considerations, it is difficult to inject large sample volumes. The amount of the target component contained in a single chromatogram peak is roughly several micrograms (µg) at most. However, FTIR permits qualitative analysis of these components, producing clear IR peaks even for trace volumes.