Over the past twenty years, many works focused on MOSH contamination in foods have been published. Although the presence of mineral oil in food has been known and studied for long time, the CONTAM Panel of the EFSA pinpointed that the information available on MOSH and MOAH occurrence, along with a full elucidation of their toxicity, were still poor and not sufficient to establish acceptable daily intake values. Nevertheless, due to the presence of well-known carcinogenic compounds in the MOAH fraction (e.g. benzo[a]pyrene), the EFSA expressed its concern and suggested that MOAH should not be present in food.

Heart-cutting liquid-gas chromatography (LC-GC), equipped with a flame ionization detector (FID), is the most applied technique for the quantification of MOSH in vegetable oils. Though the specific characteristics of the first LC dimension may differ, it is always exploited to retain triglycerides and obtain a purified hydrocarbon fraction. The MOSH fraction, transferred and analyzed in the GC dimension, is very complex and it appears typically as a “hump”. A validated fast and sensitive LC-GC method was used to analyze homogenized solid baby foods (meat, fish, and fruit). Various degrees of contamination were found in all samples, therefore to confirm such a delicate finding, the LC fractions, relative to the most contaminated samples, were collected off-line and then analyzed by using comprehensive two-dimensional GC-quadrupole mass spectrometry (LC//GC×GC-qMS).

All the sixteen baby-food samples reported in Table 1 were purchased from local supermarkets. The baby foods were sold as combined twin 80-g jars. 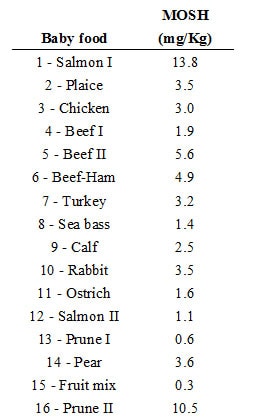 All samples were analyzed by using an LC×GC system, data were acquired by the LCsolution software.

The GC PTV injector was temperature-programmed as follows: from 75°C (1 min) to 360°C at 250°C/min. Injection mode: split, at a ratio of 200:1 for 1 min during sample introduction and solvent vent, then splitless for 1 min during sample desorption and  transfer, then 50:1 for the remaining analysis time. Data were acquired by the GCsolution software.

The LC-GC software enabled the control of each instrument through the respective native software.

The LC-GC method used, developed and validated, can be considered as both sensitive [limit of quantification (LOQ): 2 mg/kg in oil] and fast (sample throughput: 4/hr). The primary silica dimension retains the lipidic matrix, while the (possible) MOSH fraction is transferred to a programmed temperature vaporizer in a single heart-cut, and is then analysed in 9 min on a micro-bore GC capillary. The method was applied to baby foods, containing either meat or fish and vegetable oil, in all case sunflower oil, which was present in low amount, most probably less than 5% (Table 1). Specifically, three products were fish-based (2 salmon, sea bass, plaice), while all the others contained meat as main ingredient (chicken, 2 beef, calf, beef-ham, turkey, rabbit, ostrich). Before extraction all the glassware was carefully rinsed with distilled hexane and acetone, in order to reduce the contribution of the blank to the final amount found. Hexane-baby food extraction was performed three times; the fourth extraction gave a negligible analytical response. As can be observed in Table 1, the meat and fish baby foods were all contaminated (the results are the average of two applications) to various degrees. The highest MOSH level was found in the salmon I sample (13.8 mg/kg). The GC chromatogram, relative to the salmon I baby food, is reported in Figure 1. 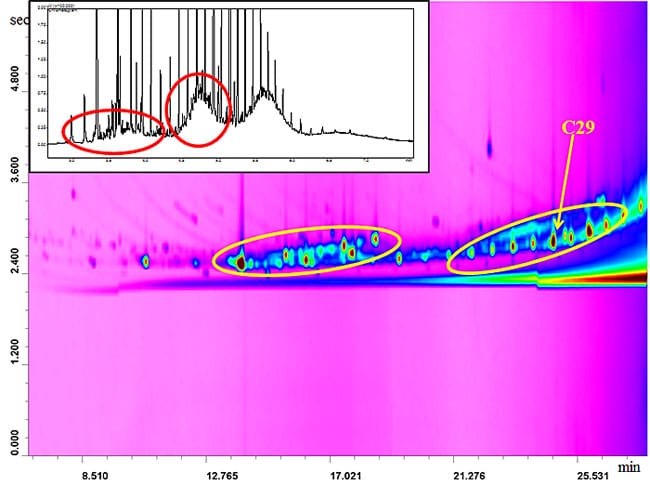 Figure 1. TIC GC×GC–MS chromatogram relative to the MOSH fraction derived from the salmon (I) baby food.

The LC-GC-FID result, for the salmon I sample, is reported in Figure 1B for comparison purpose. to make a direct comparison easier. The MS spectra obtained in the TIC 2D chromatogram confirmed the MOSH contamination in the salmon sample. Considering that the quantity of salmon baby food, in each portion, is 80 g, then there were circa 1.1 mg of MOSH in a jar. In general, the shape and the range of the MOSH hump can be used to derive information regarding the source of contamination. For example, lubricating oils generally form a hump with a center ranging from C27-C29, extending to over C40, while paraffin contamination, derived from heating or diesel oil (in atmospheric particulate matter), tends to range from C16 to C30. In the samples analyzed can be affirmed that more than one contamination source is probably present in most samples. The study was extended to fruit-based baby foods containing no vegetable oil. Four samples (2 prune, 1 pear, 1 fruit mix) were subjected to analysis, and found to contain MOSH concentrations in the 0.3-10.5 mg/kg range (Table 1). Two baby foods (prune I and fruit mix), were presented a MOSH hump below the C25, while the pear sample was right such a alkane; the prune II sample was the second most contaminated, considering all the baby foods subjected to analysis (Table 1). To investigate if it was possible to find a correlation between the contamination and a specific ingredient, an apple baby food was lab-produced using the ingredients reported on the jar label (fruit, sugar, corn starch, water), and then analyzed. A significant level of contamination was found in the final product, thus each ingredient was analyzed separately (apples, sugar and starch). MOSH contamination was found in the commercial corn starch (7.3 mg/kg) and sugar (4 mg/kg). The former was also contained as an ingredient in the meat and fish products and, presumably, was partly responsible for the MOSH contamination. All the samples analyzed were found to be MOSH contaminated with an average value of 3.8 mg/kg. None a single ingredient can be pinpointed as the source of contamination, but most probably a contribution derived from each ingredient. Moreover, the hydrocarbon molecular-weight range varied, meaning that the contamination most certainly came from different sources.