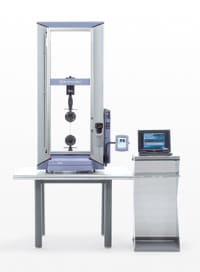 A pull of a small ring makes an opening in the cap of a beverage can. This ring is called a ring pull or ziptop. A groove is engraved on the thin metal plate of the can top so that a drinking hole of a predetermined shape is opened along the groove. The groove is engraved instantaneously by a press allowing a cost-saving mass production line. If the groove is too deep, the can may open by mistake due to the shock of its own weight falling inside an automatic vending machine. If it is too shallow, it can not easily be opened by delicate fingers, endangering the market for female and child consumers. Thus, manufacturers of beverage cans must always take care to control and evaluate the depth of their grooves and the force required to pull the ring pull.
The machines of the Shimadzu Autograph series are high performance universal testing machines based on distributed processing system and a full digital control system by multiple CPUs for enhanced and expanded functions. One of the new features added to new models is an expanded filing function, with which testing and data processing parameters, and data measured or processed can be stored onto floppy disks in a one touch operation. This avoids wasteful consumption of valuable specimens because the stored data can be read out for later use and processing at any time. Among other superior features is an automatic range change over function for load and strain, with which specimens of unknown properties can be easily and accurately tested and evaluated in the form of load-strain curves at any scale.
Thanks to these and other superior characteristics, the Shimadzu Autograph series is relied upon for the evaluation of strength and displacement properties of a wide range of industrial products and daily necessities.
The following presents the results of a test of pulling force for ring pulls of beverage cans.

Evaluation of pulling force for ring pulls of beverage cans 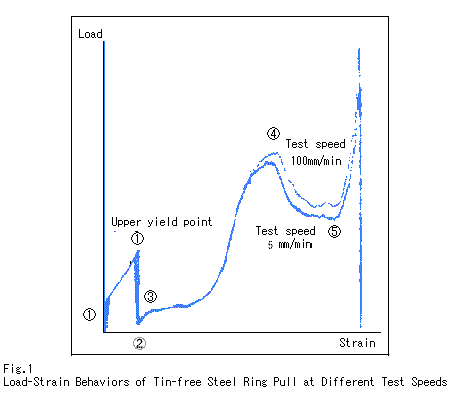 Fig.1 shows typical load-strain curves among many pulling tests on ring pulls of beverage cans. Opening behavior differed depending on ring pull shape, groove depth, the materials of the ring pulls, etc.
Opening behaviors can be reprocessed as midway data for recalculating a load-strain curve later by allocating data (any of five midway data for loads and strains respectively) to some points (turning points, for example) of the load-strain curve through the reprocessing function.
load. the of states following represent Fig.1 in points five The

These evaluations clearly indicates that opening behaviors differ depending on materials, shapes, and depths of ring pull grooves.
This testing machine is applicable to testing or evaluating the strength and mechanical behaviors of a wide variety of materials and products such as metal, rubber, plastics, ceramics, electronic devices, foods, medical supplies, etc.