The high complexity of many food samples places a great demand in terms of both separation capabilities, and speci_city of detection. As far as separation is concerned, the implementation of multidimensional (MDLC) liquid chromatography techniques has provided enhanced resolving power for highly complex samples, especially in the "comprehensive" mode (LCxLC), in which the whole effluent from the first chromatographic dimension (1D) is transferred to a second chromatographic dimension (2D). As far as operation mode is concerned, “continuous on-line” techniques bring in additional advantages, including no need for flow interruption, no increase in overall analysis time, and capability of full automation, over other instrumental arrangements of two-dimensional LC, e.g. involving off-line transfer between the two dimensions (LC-LC), or the “stopflow” techniques.

The enormous analytical advantages to be gained by coupling LCxLC separation to MS detection would be clear, if we consider the limitations of the two techniques when considered individually, and in which way a combination of the two have overcome them, generating the most powerful analytical tool today for non-volatile analytes. With respect to conventional LC-MS, the combination of two LC separations enhances physical separation of the components, reducing undesirable matrix effects arising from co-elutions. Maximizing the resolution is beneficial for subsequent MS detection, in terms of sensitivity and dynamic range, since it alleviates ion suppression effects due to insufficient separation, which may cause high abundant species to obscure the detection of less abundant ones. Unlike the UV detector, MS systems can also be employed with non-absorbing analytes, and can be operated in the full scan mode (TIC) or, more specifically, in tandem MS (MS-MS) experiments or in the selected ion monitoring (SIM) mode. Constant neutral loss or precursor ion scanning techniques help in distinguishing the ions of interest from unspecific matrix components simply by monitoring only those m/z values which originate from a characteristic fragmentation pattern. The so-called selected reaction monitoring (SRM) mode enhances selectivity and lowers detection limits, therefore reducing sample consumption; additionally, the SRM approach can also decrease analysis times by reducing the need for clean-up procedures.
This present work describes a novel LCxLC/PDA/MSMS instrument, capable of extremely high-resolution power, as well as targeted and untargeted analysis, simultaneously. The system was successfully employed for the characterization of the native carotenoids in red chili pepper, also allowing for quantification of beta-carotene, at sub-ppm level.

The red chili pepper sample (Capsicum annuum L.) was purchased in a local market. For the extraction of intact carotenoids (not saponified), 200 g of red chili pepper homogenate were treated with three consecutive 300-mL aliquots of a methanol/ethyl acetate/petroleum ether (1:1:1, v/v/v) mixture. The extracts combined were filtered through a paper filter, evaporated to dryness under vacuum (30° C), and the dry residue was then dissolved in 3 mL of a methanol/tert-butyl methyl ether (1:1, v/v) mixture and filtered through a 0.45 μm Acrodisc nylon membrane (Pall Life Sciences, Ann Arbor, MI, USA).

This research was aimed to develop an on-line LCxLC-PDA-MSMS instrumentation, based on the triple quadrupole technology, capable of fully automated operation, and exploitable for the analysis of highly complex samples, both in the targeted and untargeted mode. This novel system was assessed for the analysis of the carotenoid content of a red chili pepper extract, and the quantitative determination of the main bioactive molecule, beta-carotene.
Such a sample was chosen because of its complexity, by far overwhelming the limited peak capacity afforded by any monodimensional LC technique; thus multidimensional techniques are deemed as necessary, not only from the separation standpoint, but also as far as MS detection is concerned. Step-by-step implementation of the system addressed the following issues: choice of the stationary phases, column dimensions, flow rates, connections, and detection parameters.
In our LCxLC platform, normal-phase chromatography (NP-LC) and reversed-phase chromatography (RP-LC) were used in the first and the second dimension, respectively. NP-LCxRP-LC represents one of the most orthogonal approaches in two-dimensional liquid chromatography, capable to deliver very high resolution power due to independent separation mechanisms operating on the individual stationary phases.
However, this type of coupling is not easy and straightforward to achieve, due to the incompatibility of the solvents that are used in the two dimensions, and possible problems of peak focusing at the head of the secondary column. Such a matter was circumvented by the use of a micro-bore column in the first dimension, i.e. a 250x1.0 mm I.D., 5 μm-d.p. of cyano stationary phase, operated at a mobile phase flow rate of 10 μL/min. This served two purposes: first, reduce the mobile phase immiscibility and the occurrence of solvent strength mismatch, which would have affected system compatibility in such a combination. Non-polar hexane was in fact the 1D solvent, while aqueous acetonitrile/isopropanol mixtures were employed for the 2D analysis. Additionally, the low flow rate employed also reduced band broadening and helped to achieve effective peak focusing at the head of the 2D column, thanks to the minimized mobile-phase strength, connected to the transfer from 1D to 2D. On the other hand, the separation in 2D must be fast and on-column focusing must be achieved, in the on-line, comprehensive multidimensional system. Our fully automated LCxLC system was conﬁgured around two electronically activated two-position, six-ports switching valves for within-loop automated fraction collection/re-injection, equipped with two storage loops of identical volume (20 μL). The whole effluent from the 1D micro-bore column was transferred on-line to the second dimension column, consisting of a 50 mm length, 4.6 mm I.D. of a C18 fused-core column (2.7 μm d.p.). The 1D effluent was fractionated every 60 s, being the modulation time (cycle time) of the switching valves which in turn was equal to the analysis time in 2D. The choice of the modulation time and the gradient proﬁle was made to meet the following stringent requirements: each fraction injected onto the second dimension column must be completely eluted before the following transfer occurred; the 2D analysis time has to be kept as short as possible, not to impair the separation achieved in the 1D (in this respect, a large number of cuts is highly beneﬁcial). Moreover, re-conditioning of the stationary phase from each repetitive gradient should be fast enough to fit the limited time allowed. In order to fulfil all these requirements, the second dimension column was operated at a very high ﬂow rate (4 mL/min), with a gradient program starting with 100% concentration of the weaker solvent, acetonitrile. A fast ramp up to 80% of the stronger solvent (isopropanol) was run, to ensure the elution of all the components within a fast analysis time of 60 s, including reconditioning time of 0.06 min. Repetitive injections of the sample under such conditions afforded perfectly super-imposable elution profiles (data not shown), demonstrating sufficient column re-equilibration time after the gradient. The shortest possible length of stainless steel tubing of 0.1 mm I.D. was employed for extra-column connections and valves; as predictable, longer or higher I.D. tubing negatively affected the overall performance of the system. This was in part due to additional dead volumes and the resulting peak broadening, but also to significant dilution which jeopardized the MS response, with the overall dilution factor being multiplicative of the dilution factors in each dimension.
Results obtained from the NP-LCxRP-LC analysis of free carotenoids and carotenoid esters in the red chili pepper extract are shown in the contour plot of Figure 5.1. 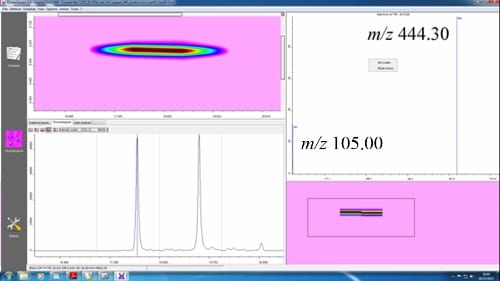 Chromatography on the cyano stationary phase allowed a good separation of the carotenoids in groups of different polarity in the first dimension, as can be seen from the ellipses in Figure 5.1, with retention times increasing in the order: hydrocarbons < monool esters < diol diesters < diol monoketo diesters < diol diketo diesters < diol monoepoxide monoesters < free monools < diol monoketo monoesters < diol diketo monoesters < polyoxygenated free xanthophylls. On the other hand, the C18 column allowed the separation of carotenoids within each class, according to their increasing hydrophobicity and decreasing polarity (for components of the same class, the elution order increased with the number of carbon atoms of the fatty acid chain). By optimizing the elution parameters (as a compromise between the chromatographic separation, modulation time, maximum column operating temperature, and highest flow rate allowed by the system backpressure limit), a satisfactory separation of the sample carotenoids was obtained, with ten different classes distributed along characteristic chemical patterns in the 2D retention plane.
Identification of the separated compounds was achieved by means of both PDA and MS data. The possibility to operate in both positive and negative ion mode is a useful feature for the untargeted analysis of unknown samples, and in the special case of carotenoids, it offered the double advantage of improved sensitivity and/or identification power. MS spectra obtained under negative ionisation mode are in fact dominated by the presence of very intense pseudomolecolar ions [M].-, which make identification/quantitation of low-abundant components easier; on the other hand, abundant fragmentation is, generally, observed under positive ionization, especially for carotenoid esters, whose fragment ions can help in structure elucidation through dedicated software/database.
The main advantage of this developed system is the possibility to carry out quantitative analysis with very high selectivity and sensitivity, in the so-called MRM mode, for target molecules. Beta-carotene (m/z 536.40) transitions at m/z 444.30 (quantifier ion) and m/z 105.00 (qualifier ion) were selected for the construction of a calibration curve, in the 1 ppb-10 ppm concentration range. Very good linearity was observed, with regression line equation: y = 410259x + 49414; Linear Correlation Coefficient (R)= 0.998976. The amount of beta-carotene was afterwards determined, in the real sample analyzed, as equal to 1.22 ppm. Figure 5.2 shows an expansion of the 2D plot, with the beta-carotene blob and the MS spectrum with the two transitions. 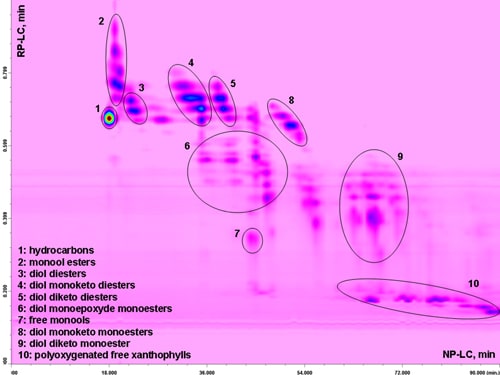 The LCxLC system coupled on-line to the triple quadrupole mass spectrometer, turned out to be a novel analytical system, capable of extremely high-resolution power, as well as targeted and untargeted analysis. Moreover, the 2D plots rendered by the front-end LCxLC separation may be of great help in the identification of unknowns, whenever standard components or reliable MS library spectra are not available. The separated molecules are in fact distributed along chemically-similar compound patterns, and this will provide useful information on their structures and properties, according to the separation mechanisms involved.