AC method: AC voltage is applied on the discharge needle and a well-balanced mixture of positive/negative ions is emitted in rapid alternation from one electrode.

DC method: DC voltage is applied to a couple of electrodes. One is positive and the other is negative. Each electrode emits ions of one polarity only. An effective static removal angle is limited if the two electrodes are distanced. As electrodes deteriorate, initial ion balance is lost.

On Stand
While being neutralized, charge-prone samples can be injected into a container without being scattered. You can also easily neutralize spatulas and sample bottles in the midst of the work flow.
Samples can be neutralized before weighing measurements.

Not only is static electricity a source of discomfort for people, it also has a harmful effect on measurements.
The following video shows the influence on measurements that samples carrying an electrostatic charge can have, and how an ionizer (anti-static device) can be used to alleviate the problem.

Use an Ionizer for Stable, Accurate Measurements!

The AP series analytical balances (AP-W and AP-X series) are equipped with the space for incorporating the ionizer, and with an interface allowing for operation using the main unit’s keyboard. As seen in the video, simply pressing one button on the main unit’s panel eliminates static electricity. This makes stable measurements possible. 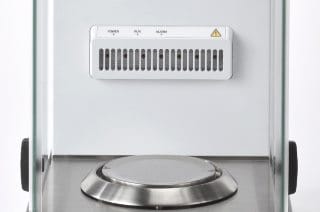 In addition to being incorporated within AP series analytical balances (AP-W and AP-X series), the STABLO AP ionizer can also function as a stand-alone device.
When being used as a stand-alone unit, the device can be used in two ways. It can either be used in a fixed position using the stand included as standard, or it can be used as a handheld device, allowing it to be moved freely to any desired position. This allows the unit to be used for a variety of purposes other than balance measurements, such as for eliminating static electricity from samples or containers. 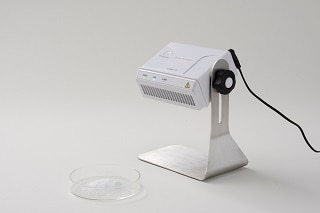