There is a tendency for the long axes of the molecules of stretched polymers to line up in the stretching direction, and the extent of this can be ascertained using polarization measurement. Film samples are usually analyzed with a transmission method using a polarizer. Here, however, an example of polarization measurement using ATR is presented.

Fig. 3 shows the results obtained by analyzing unstretched PET film in four modes. There are hardly any differences between any of the four spectra, indicating that there is no molecular orientation. 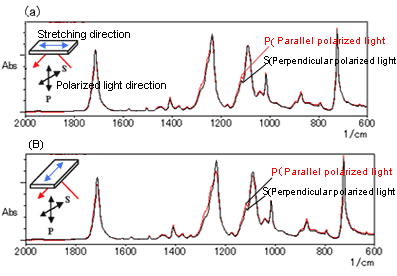 Fig. 4 shows the results obtained with the same PET film stretched by a factor of three.
For each stretching orientation, differences can be observed in the spectra obtained with parallel polarized light and perpendicular polarized light. For example, the peak in the neighborhood of 1,340 cm-1 corresponds to the CH2 wagging vibration and the mode in which the molecules oscillate in the direction of their long axes. In Fig. 4 (a), this peak is high for parallel polarized light (P) and low for perpendicular polarized light (S). On the other hand, this is reversed in Fig. 4 (b), indicating that the molecules are oriented in the stretching direction. 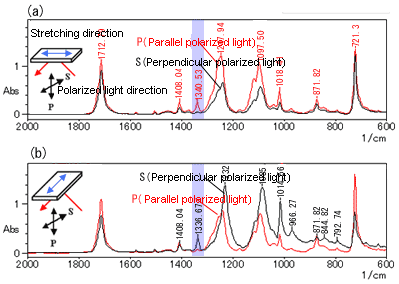 Assuming the peak at 1,410 cm-1 in Fig. 4 corresponds to in-plane bending vibration of benzene rings in a non-dichroic band, this peak was used to normalize the spectra (match peak intensity levels), then Figs. 5 (a) and (b) were obtained by generating differential spectra of the results for parallel polarized light and perpendicular polarized light shown in Figs. 4 (a) and (b).

It has been shown here that polarization measurement using ATR is extremely effective for investigating the orientation of film surfaces. Single-reflection ATR using a diamond prism, however, does present some problems. For example, there are concerns about the effect that the localized application of large forces may have on the molecular orientation, and in the analysis of polymers with a high refractive index, the peaks in bands of strong absorbance may be lopsided. Therefore, when investigating orientation with polarization measurement using ATR, in consideration of these potential problems, it is necessary to select the optimum peaks that exhibit dichroism.