FTIR is convenient and effective for the analysis of foreign matter and other defect analysis and is widely used in many fields of application. FTIR encompasses many measurement methods and accessories, including infrared microscopy and singlereflection ATR. The selection of the appropriate measurement method and accessory for the aim and target of the analysis is extremely important to obtain a satisfactory spectrum. Therefore, FTIR TALK LETTER previously introduced information on accessories for infrared microscopy (Vol. 3 and 4) and measurement techniques (Vol. 5 and 6).
However, details about the information contained in the measured spectra and how to use it have not yet been presented. This article, "Foreign Matter Analysis by FTIR －Handling Spectra of Foreign Matter－", introduces the basics of reading the analysis results for foreign matter.

1. The Effects of Sampling

3. Comparison with a Normal Area or a New Part

During defect analysis it is common to compare the defective area with a normal area or a new part to determine the cause of the defect. In particular, if the defect does not result from ingress of a completely different substance such as foreign matter but is due to deterioration or other change in part of the product, comparison with a normal area clarifies the differences before and after the change and indicates what kind of change occurred.
Fig. 4 shows the results of single-reflection ATR analysis (diamond prism) on both a normal area and the discolored area, after a discolored area was discovered on a resin component. Both measured spectra are the spectra for acrylonitrile butadiene styrene (ABS) resin. However, a comparison of the two reveals that the peaks in the spectrum for the discolored area near 1720 cm-1 and 3400 cm-1 are more intense than for the normal area, while the peak near 968 cm-1 is much weaker.
The peaks near 1720 cm-1 and 3400 cm-1 are thought to be C = O stretching vibrations and O - H stretching vibrations, respectively, and neither of these peaks exists in ABS resin.
The peak near 968 cm-1 is thought to result from the = C - H out-of-plane vibrations of the trans-vinylene group in the butadiene of the ABS resin. These results suggest that the discoloration resulted from oxidative degradation that broke the C = C double bonds of the trans-vinylene group, forming
a C = O group and O - H group.

Infrared spectroscopy using FTIR is an effective method for the identification and qualitative analysis of substances when analyzing foreign matter. However, FTIR alone is often not enough to identify the foreign matter and determine the cause of the defect. Such cases require multifaceted evaluation using information obtained by other analytical methods. Instruments commonly used for foreign matter analysis include the scanning electron microscope/energy dispersive X-ray spectrometer (SEM-EDS; imaging and element information from an electron microscope) and the energy dispersive X-ray fluorescence spectrometer (EDX; easily obtains element information at atmospheric pressure). However, the analysis example presented below uses the confocal laser scanning microscope (CLSM).

Fig. 5 shows an infrared microphotograph of an abnormality discovered on the surface of a film. Numerous fine particles appear to be stuck to the surface between the center and bottom-left of the photograph. The infrared microscope ATR method that is effective for the surface analysis of minute areas was used to analyze this abnormality. Fig. 6 shows the measured results for the normal and abnormal areas. The results for both areas reveal the spectrum for polyethylene terephthalate (PET) and no obvious difference is apparent between them. It is therefore considered likely that fine powder from the PET film adhered to the film surface in the abnormal area.

Subsequently, surface observations and 3D surface shape evaluation of the film surface were performed using a confocal laser scanning microscope (CLSM). A CLSM can take high-resolution images in air of non-conductive samples without the need for special pretreatment. The 3D surface shape evaluation simultaneously acquires information in the height direction. The magnification is from approximately 100× to 15000×.
Fig. 7 shows the CLSM image of the abnormal area of the film. The observed field is 64×48μm. A clear image was obtained that shows the particles and what appear to be scratches. Fig. 8 shows the height profile along the red line at the center of Fig. 7. In addition to the height increases expected where a particle adheres to the film surface (height of the flat film surface plus the height of the protruding particle), the height profile also reveals valley-like depressions in the film surface.
Analysis by the infrared microscope revealed both the normal and abnormal areas to be PET, and the CLSM observations and 3D surface shape evaluation revealed minute irregularities in the abnormal area of the film. This suggests not that PET particles adhered to the surface of the film, rather that the film surface is not smooth but roughened on a minute scale. 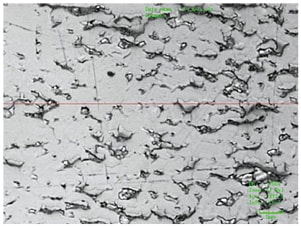