Simply mount the mobile phase, column, and sample, press the button, and the instrument does everything for you. This is the fully automatic operation that we dreamt about. However, automating the solvent delivery unit drain valve operation is the final hurdle to achieving it.
When introducing new mobile phase or priming the pump it was previously necessary to open the drain valve and use a syringe to draw out the old solvent prior to filling the interior of the solvent delivery unit with the new mobile phase (see Fig. 1), unless a separate flow line switching valve was specifically provided.

The Auto Purge function runs the following series of operations at the touch of a button.

The LC-2010 Series auto purge function is introduced in detail below.

The LC-2010 incorporates a solvent delivery unit, autosampler, column oven, and detector. To produce a synergistic effect between the various units in the integrated system, we wondered whether an auto purge function could be added to the high-pressure 6-way valve for sample injection in order to resolve the issue of draining the solvent delivery unit, which had been a barrier to automation.
The auto purge function was achieved by devising the mechanism of flow lines including the high-pressure 6-way valve and by modifying the solvent delivery unit check valve. The flow diagram to the right explains this function.

Fig. 2 shows the flow line during LC-2010 analysis. (It has been simplified for clarity.)
The autosampler comprises of a sampling needle that can move in the X, Y, and Z directions, high-pressure 6-way valve, low-pressure valve, and measuring pump that incorporates both sampling and rinse functions. In addition to the sample vial position, the sampling needle can move to three other positions:

During analysis, the autosampler needle is at the injection port position. Mobile phase supplied by the pump transports the entire sample that was drawn into the sampling needle to the column.

Fig. 3 shows the flow diagram while the autosampler is drawing in the sample. The high-pressure 6-way valve rotates 60 degrees, such that the pump and column are directly linked through the high-pressure valve.
The low-pressure valve stops at a position where all of the ports are closed. Thus, with the flow in the sample loop stopped, the sampling needle can be moved to the sample bottle position. The needle descends into the sample solution and the measuring pump draws the designated volume of sample into the needle.
The sampling needle then returns to the injection port and the valves switch to the position in Fig. 2 to start analysis. (Previous Shimadzu Autosamplers could handle the processes up to this stage.)

Meanwhile, modifications to the solvent delivery unit check valve ensures a reliable mobile phase flow, even if the flow line between the mobile phase and pump contains bubbles. This is also essential for auto purging.
[ US Patent US6129840 ]
(Kk) 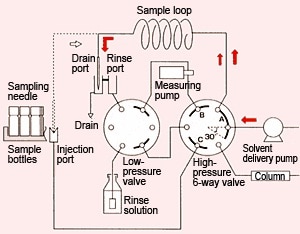 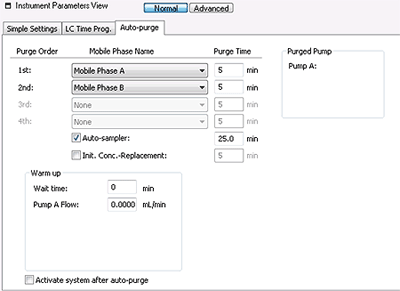