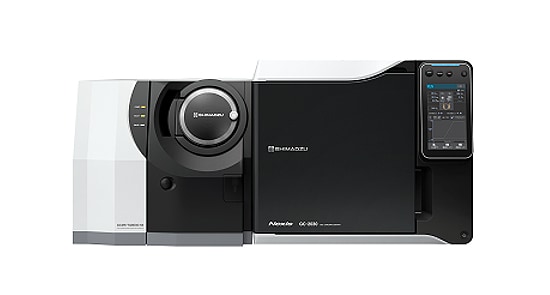 Shimadzu has announced the release of three models of the GCMS NX series gas chromatograph mass spectrometers. The new NX series, which consists of the GCMS-TQ8050 NX, the GCMS-TQ8040 NX, and the GCMS-QP2020 NX, combines the features of high accuracy and high sensitivity, with ease of maintenance, and improved operating efficiency. The GCMS NX series will be exhibited at JASIS, which will be held at Makuhari Messe from September 5 to 7.

Gas chromatograph mass spectrometers (GC-MS) are used for quantitative analyses to check for the presence of environmental contaminants and residual pesticides in foods. They are also used to test for contamination with banned drugs, for analyzing the components responsible for flavor and aroma, and for the quality control of chemicals. In recent years, although demand for GC-MS continues to remain steady, such products are now required to provide not only performance for high sensitivity trace analysis but also to be user friendly and convenient for all types of operator. Behind this is the shortage of skilled operators, which has become an issue for analysis laboratories. Shimadzu has released the GCMS NX series gas chromatograph mass spectrometers, which, while providing basic functionality such as high accuracy and high sensitivity, also incorporate functions to raise the efficiency of analysis operations.

The GCMS NX series systems use the latest Nexis GC-2030 as the gas chromatograph (GC) unit. This GC model is equipped with a next-generation flow controller that enables ultra fast and ultra precise control and that features world class usability as well as offering the extensibility needed to accommodate a variety of applications. The combination of the Nexis GC-2030 with a mass spectrometer boasting such world class sensitivity* assures both high sensitivity and high performance.

2. Ease of Maintenance Enables Anyone to Operate the System

These systems incorporate Click Tek, a mechanism that allows consumables to be attached or removed without using tools. Features such as a sample injection port that can be opened and closed without using tools, as well as a column oven with a light that illuminates the area close at hand, reduce maintenance effort. The time required to replace certain parts has been shortened by 80%. With its ease of maintenance, the GCMS NX series contributes to raising productivity at analysis laboratories by eliminating dependency on particular operators to handle the work.

With conventional GC-MS, the operator must check the system during startup and shutdown, and during maintenance and tuning. With the GCMS NX series, the systems are equipped with an active time management function, which enables control of the total system operating time and shorter standby time while automating verification operations. Improved system operating efficiency is achieved by reducing the verification steps and so on involved in using GC-MS.

*At the time of publication