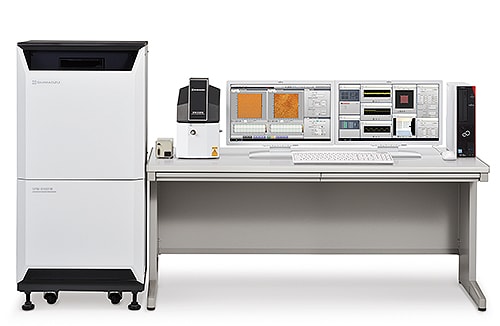 Shimadzu Corporation announces the release of its flagship SPM-8100FM scanning probe microscope, featuring five times faster data acquisition, four times wider scan in both X and Y-axis directions, and ultra-high resolution performance that is as high in both air and liquids as in a vacuum.

A scanning probe microscope (SPM) is a microscope that scans the surface of a sample using a cantilever fitted with a fine probe -with a tip radius of just a few nanometers- to measure the surface topology and physical properties of the sample. There are different types of SPM, and the SPM-8100FM is classified as an atomic force microscope (AFM), which is able to observe or measure the three-dimensional structure of sample surfaces at the nanometer level by detecting the forces acting between atoms when the probe is positioned near the sample surface. In order to detect such tiny atomic forces, the instrument adopts an extremely low noise and highly sensitive frequency modulation (FM) method that enables ultra-high resolution to be achieved.

In addition to high resolution observation of metals, semiconductors, organic polymer materials, biological materials, and so on, the microscope can also be used to observe the local structure at the solid-liquid interface. It is therefore expected to contribute to advanced basic research in a wide variety of research fields, including polymers, catalysts, batteries, tribology, and life sciences.

Background to the Development

Cutting-edge nanotechnology research is making strides in structural analysis and physical property measurement at the atomic level. Incorporating results from the Japan Science and Technology Agency (JST) program for the development of advanced measurement and analysis systems, the previous SPM-8000FM model, which was released in January 2014, was the world's first SPM able to achieve the same high resolution observations in air or liquid as in a vacuum. However, in contrast to its excellent observation performance, reducing acquisition times remained a hurdle.

Therefore, by updating the scanner used in the SPM-8000FM and making other improvements, Shimadzu developed the SPM-8100FM, a model that offers both ultra-high resolution observation and high throughput.

By using an HT scanner to provide outstanding speed, the new model offers five times faster data acquisition than the previous model, while still maintaining the same exceptionally high resolution. In addition, the maximum scan range was expanded by four times to 10µm in both the X and Y-axis directions. Furthermore, it is now easier to search the observation field, which improves observation throughput. The system is expected to shorten the time required for observing samples in air or liquid, an area where Shimadzu AFM systems already excel, not only when making high resolution observations of atomic and molecular array structures on crystal surfaces, but also when analyzing the local solid-liquid interface structures that affect the functional expression of biological and polymer materials.

The function that controls the probe as it approaches the sample surface was improved to reduce the number of complicated steps involved in moving the probe close to the surface and to reduce the risk of the probe colliding with the sample. Furthermore, the software was also expanded to address user requirements for monitoring instrument status in real time and for specifying parameter settings efficiently while viewing the observed image, by adding a function for displaying a signal corresponding to probe movement and providing dual monitor support. These changes significantly improve operability. Previously, it sometimes took time for operators to become proficient, but this new model was developed specifically so that a wide range of users could learn to use it quickly.