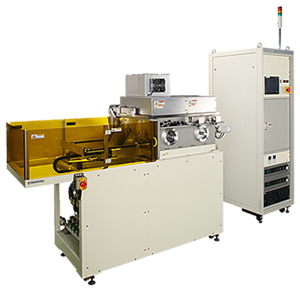 JCU Corporation, Shimadzu Corporation, and Kimoto Co., Ltd., in collaboration with the Kanto Gakuin University Materials & Surface Engineering Research Institute, have jointly developed a new technology to coat a chromium film that transmits electromagnetic waves. It is expected that the use of this film coating technology will enable automobile emblems fitted with millimeter-wave radar to be coated with electromagnetically transmittable film efficiently and at low cost.

Background of the Development

In recent years, millimeter-wave radar that uses the high frequency of millimeter wave has attracted attention for use in vehicle sensors to detect automobiles and pedestrians. Since this type of radar is often installed inside the emblem on the front of the vehicle, emblems that support millimeter-wave radar must be transmittable to electromagnetic waves. Automobile emblems must also support design characteristics such as gloss and color. To meet these requirements, emblems that support millimeter-wave radar currently use electromagnetically transmittable films formed by the vapor deposition of indium. However, indium is a rare metal and its film deposition is difficult, so costs and yields have been an issue.

Outline of the New Technology

This new electromagnetically transmittable film coating technology uses a special material on the surface of the material to form a base layer of an organic film, coating this with chromium using a method called sputtering. When this is heated, stress differences occur due to differences in the thermal expansion coefficients of the organic film and the chromium film, and extremely fine cracks are generated in the chromium film. These cracks allow transmission of electromagnetic waves, including millimeter waves.

Kimoto Co., Ltd. and the Kanto Gakuin University Materials & Surface Engineering Research Institute have jointly developed technology for the formation of the base layer of the organic film using a special material. The application of this special material and the chromium sputtering were performed using equipment and technology of Shimadzu Corporation. JCU Corporation proposed applying this film coating process for use in automobile emblems.

It is predicted that this market will expand and that the number of vehicles fitted with millimeter-wave radar will exceed 47 million units in 2030. Shimadzu Corporation plans to put the "ELTRA coat" technology to practical use and expand electromagnetically transmittable films in various fields including automobile emblems.