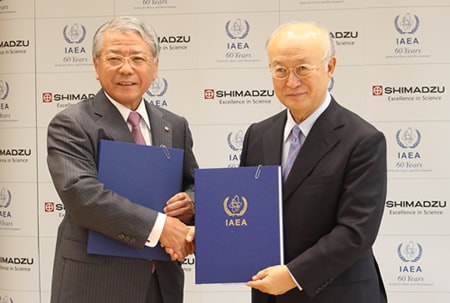 The IAEA supports development in emerging countries through the application of nuclear technology in fields such as food safety, environment, and healthcare. The LCMS-8060 donated by Shimadzu is slated to be installed at the Food and Environmental Protection Laboratory (FEPL), which is located at the Seibersdorf Laboratories near the IAEA Headquarters. The FEPL, which conducts research related to food safety and traceability management, had needed a high-speed, high-sensitivity mass spectrometer for the analysis of metabolites in order to analyze residual antibiotics, mycotoxins, and agricultural chemicals in foods, and to detect adultration in ingredients or origin.

In addition to the LCMS-8060 High-Speed Liquid Chromatograph Mass Spectrometer, the donation includes the dispatch of Shimadzu engineers to install the unit and assist in the establishment of analysis methods, support during the warranty period, and inspection at the end of the warranty. The total amount of the donation comes to 409,925 euros (51.24 million yen, converted at 1 euro = 125 yen). Shimadzu Corporation, with its Corporate Philosophy of "Contributing to Society through Science and Technology", aims to solve social problems through innovative product development.

Comments by the two participants of the signing ceremony are as follows.
Yukiya Amano, IAEA Director General
The IAEA has long used the motto "Atoms for Peace", but as of the 60th anniversary of our founding we have now adopted "Atoms for Peace and Development". I have great hopes that Shimadzu's products can contribute to "Development", the new part of our motto, in other words, support for developing nations. I would like to learn analytical techniques from the experts of Shimadzu and spread the knowledge throughout the IAEA."

Akira Nakamoto, Shimadzu Corporation Chairman
"As the IAEA's support for emerging countries in the food safety field is consistent with our Management Principle, "Realizing Our Wishes for the Well-being of both Mankind and the Earth", we made the decision to help by donating our analytical instrument. Our LCMS offers the world's highest levels of analytical sensitivity and speed. We hope that in the future, it would be used not only for food safety, but also for environmental and medical research."