March 30, 2018 | News & Notices Blue Diode Laser Module with World’s Highest Class of Power and Brightness to be Commercialized - Expected to be used as a light source for processing gold and copper - 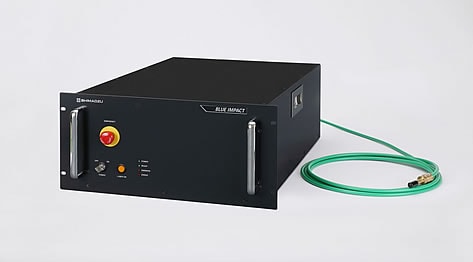 Based on results from a NEDO project, Shimadzu Corporation has commercialized a blue direct diode laser module with the world’s highest class of power and brightness.

The blue direct diode laser module, whose basic technology was jointly developed by Shimadzu Corporation and Osaka University, has successfully realized both high power (100 W) and high brightness (1.3 × 106 W/cm2). This new device is expected to be used as a light source for various applications such as welding, marking, and the 3D printing of metals including gold and copper. In addition, it is also expected to contribute to reducing processing time and electrical power consumption in these applications, which is not possible with conventional modules.

Shimadzu Corporation has added this new model to its lineup of blue diode laser module in production, the “BLUE IMPACT”, and launched sales.

The blue diode laser module*1 is expected to be utilized as the light sources for next-generation laser metal processing equipment because blue light is efficiently absorbed by metals such as gold and copper. Although blue diode laser modules have been already utilized in various products such as projectors, lighting and head-mounted displays (HMDs), they have not yet been fully used in metal processing because of issues with their power output and brightness.

To overcome those issues, Shimadzu Corporation and Osaka University have been working together in a NEDO project*2 to develop a high-power and high-brightness blue diode laser module that can be utilized as a light source for laser metal processing equipment in cooperation with Nichia Corporation. In October, 2017, the team of them developed the world’s first*3 3D printer capable of additive manufacturing of pure copper, made possible by the use of this higher brightness blue diode laser module.

Figure 2. (Left) A pure copper object manufactured with a 3D printer that uses the new high-power and high-brightness blue diode laser module. The lower half of the body is buried in copper powder. (Right) The original 3D-CAD model of the object.

[1] World’s highest class of power output and brightness
By combining laser beams from multiple laser elements and delivering them into a narrow fiber (100 µm core diameter), this module achieves the world’s highest class of power output (100 W) and brightness (1.3 x 106 W/cm2), levels that are not achievable using conventional blue diode laser modules. Generally, a brightness of more than 1.0 x 106 W/cm2 is required to weld the surface of metals. Since the new module offers enough abilities, it is expected that the device will be utilized in a variety of applications such as welding, marking, and 3D printing of metals including gold and copper.

[2] Wide applicability as a light source
Since laser beams (450 nm) from multiple blue diode laser elements are combined and delivered into a single fiber, the product can be handled with high flexibility. In Addition, since the module is compact, 88 mm(H) x 430 mm(W) x 420 mm(D) excluding the fiber, it can be easily installed into other equipment. Furthermore, the output from the laser can be easily controlled by computer and modulated to produce continuous power or pulsed power up to 10 kHz in maximum. Because of these features, the module enables high-quality and highly-efficiency metal processing with minimum thermal denaturation area and that contributes to reduced processing time and power consumption.