This year, 2021, marks the 60th anniversary of the world’s first Remote-controlled R/F (Radiography and Fluoroscopy) system, which was developed by Shimadzu Corporation in 1961.

X-ray has played a particularly important role in our company's more than 145 year history. Here, we take a look back at the history of Remote R/F systems and X-ray in the medical field.

What is an R/F system?

An R/F system is a diagnostic imaging device that uses X-ray to show the inside of a patient’s body, which allows us to view real-time fluoroscopic images. The system can be used for a wide range of examinations, including gastrointestinal (e.g., stomach and small intestine), respiratory (chest), urology and orthopedics. 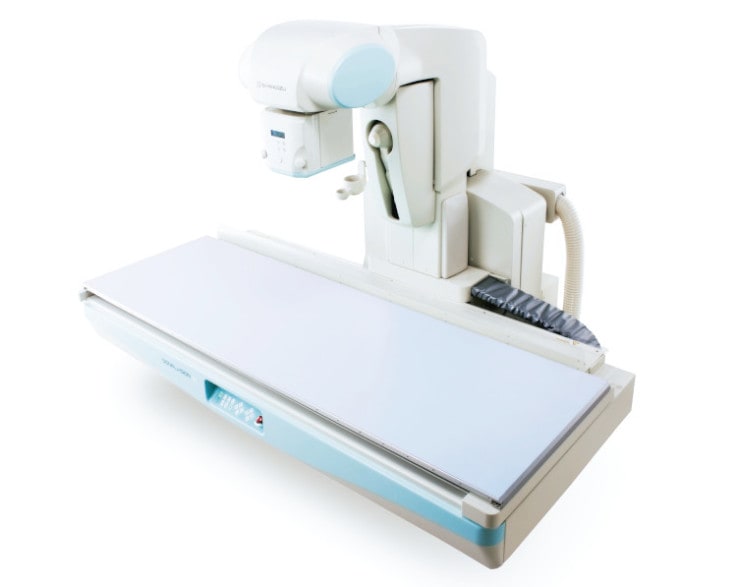 In 1961, Shimadzu completed the world’s first Remote R/F system, which was developed in cooperation with Matsushita Electric Industrial Co., Ltd. (today’s Panasonic Corporation) and Osaka Prefectural lifestyle diseases center (today’s Osaka International Cancer Institute).  Until then, all R/F systems were designed to be operated at the patient side, therefore radiation dose to the operators was a major issue. Our development of the Remote R/F system solved that issue and reduced X-ray exposure to operators to zero basically. 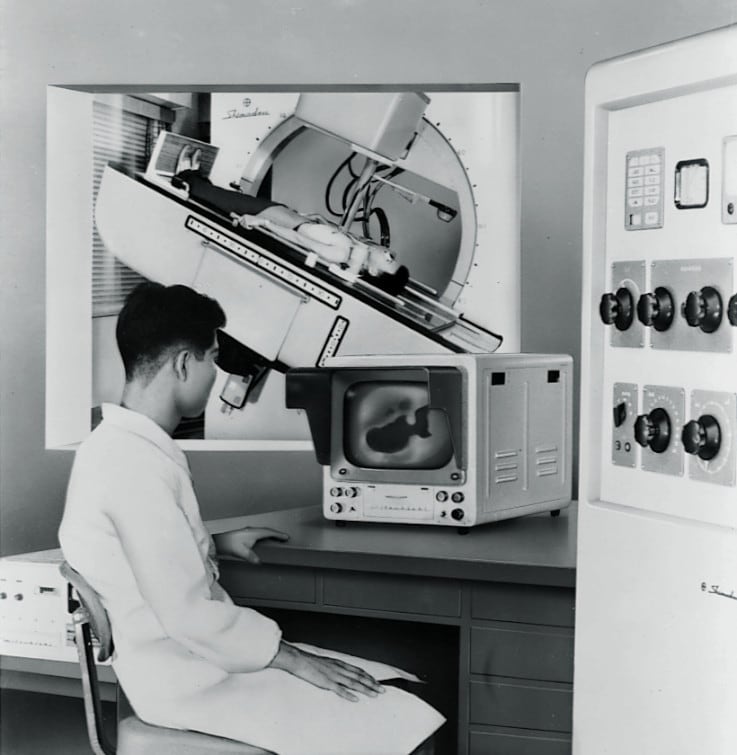 It changed the world of fluoroscopy exams completely, and “Remote R/F system” became the golden standard R/F solution today in most countries throughout the world, which has helped to save the operators from X-ray exposures.

Dr. Roentgen, a German, discovered X-rays in 1895. Just 11 months later, on 10 October 1896, Genzo Shimadzu Jr., eldest son of the company’s founder, and his team succeeded in taking X-ray images. Professor Hanichi Muraoka of the Third Higher School in Kyoto (today’s Kyoto University) selected Shimadzu Corporation as the site for his work and succeeded in the experiment using the high-voltage generator improved by Genzo. 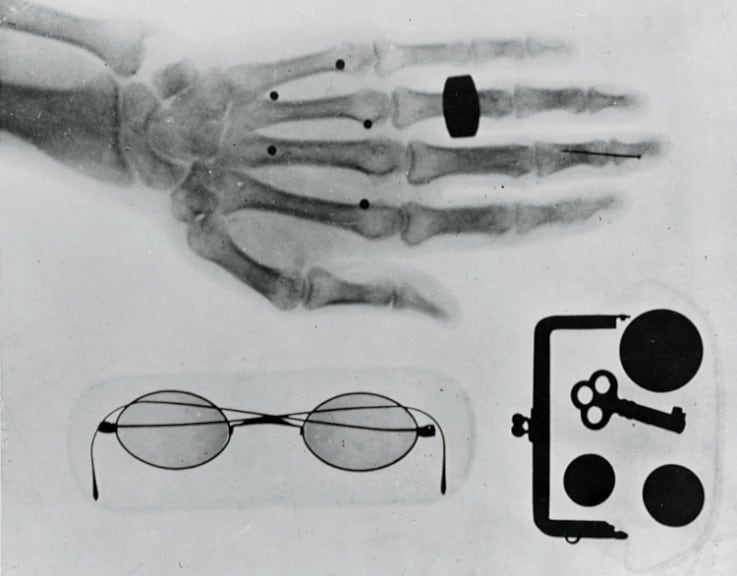 Other researchers in Japan had also succeeded in taking radiographic images; however, Genzo was the only one pursuing the practical application. In 1897, Shimadzu corporation created an educational X-ray system. Then, in 1909, it released the Japan’s first medical X-ray system which made Shimadzu the country’s pioneer in this field.

In 1927, based on his conviction that science is meaningless if it is not useful to people, Genzo established the Shimadzu X-ray Technology Training Center (today’s Kyoto College of Medical Science) to train radiographers. As the principal of the school, he encouraged his students to become a radiographer who could provide not only their skills, but also mental support for the patients.

In addition, the medical X-ray system “New Aurora,” which was manufactured around 1918, made a significant contribution to medical practice over an extended period, with some systems being used for more than 50 years.

The “Diana,” a general medical X-ray system manufactured from 1918 to around 1936, was selected in 2018 as one of the Essential Historical Materials of Science and Technology (“Future Technology Heritage”) compiled by the National Museum of Nature and Science, Japan. 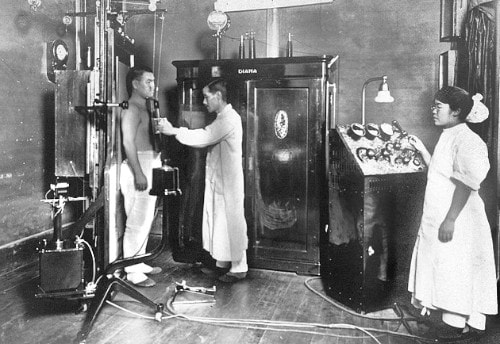 Examining a Patient with an X-Ray System, circa 1921 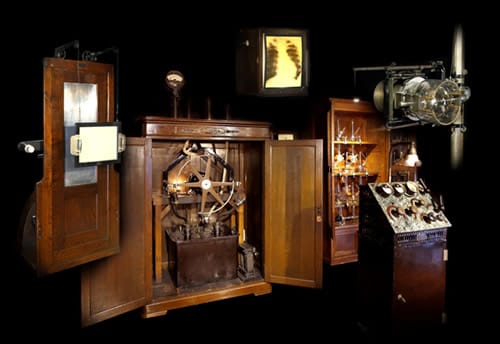 Diana used in clinical practice at the time

Since then, we have continued our efforts to contribute to the healthcare and patients all around the world by providing advanced technologies and high quality products. 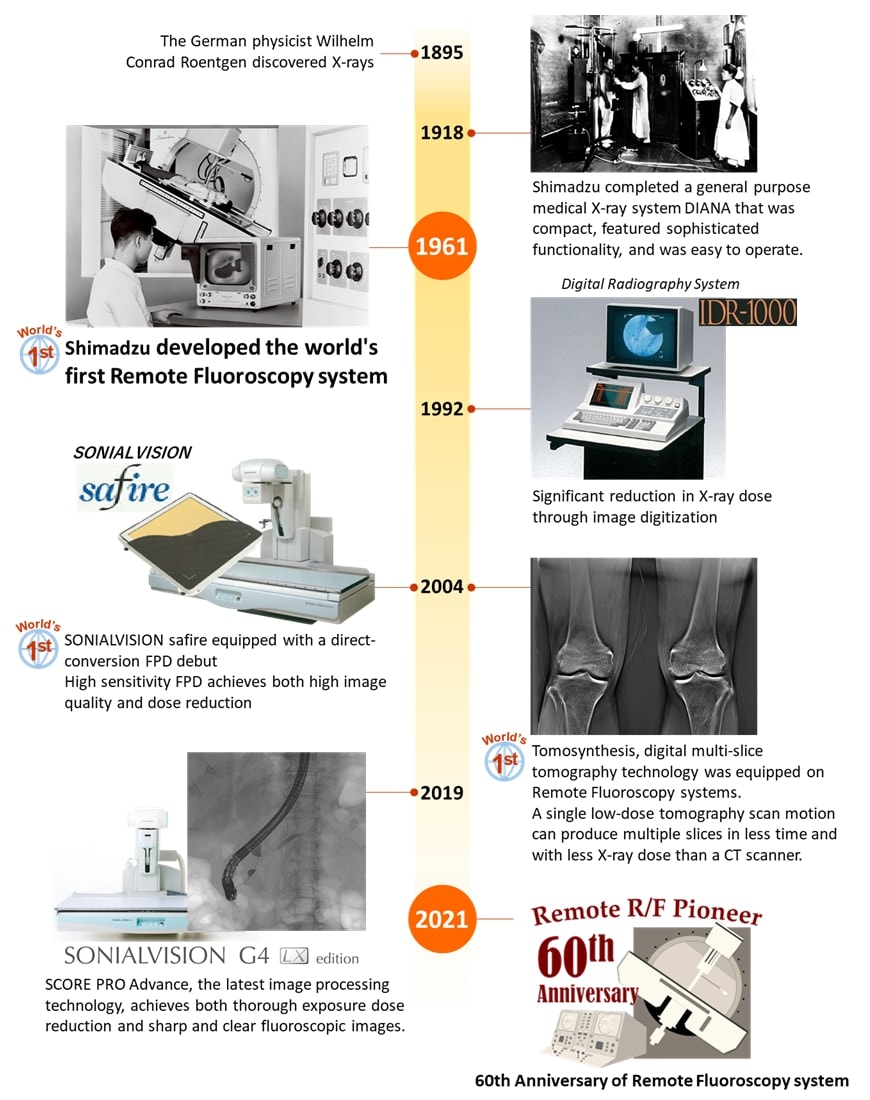 From a Shimadzu marketing personnel for R/F systems

In 1960s, at the time of development of the world’s first Remote R/F system, there was growing interest in early diagnosis and treatment of stomach cancer in Japan. This system was developed to resolve the problem that the conventional method had brought X-ray exposure to operators close to the upper limit, while many people were needed to be examined for stomach cancer.

Currently, there is a growing interest in reducing X-ray exposure. Not only manufacturers but also healthcare professionals are taking measures to reduce radiation dose and protect against X-rays.

In addition to our challenge of further X-ray exposure reduction, we are continuing the further development of R/F systems that utilize AI technology for automation, labor saving, and faster data processing to realize even better examination environments for patients and healthcare workers.