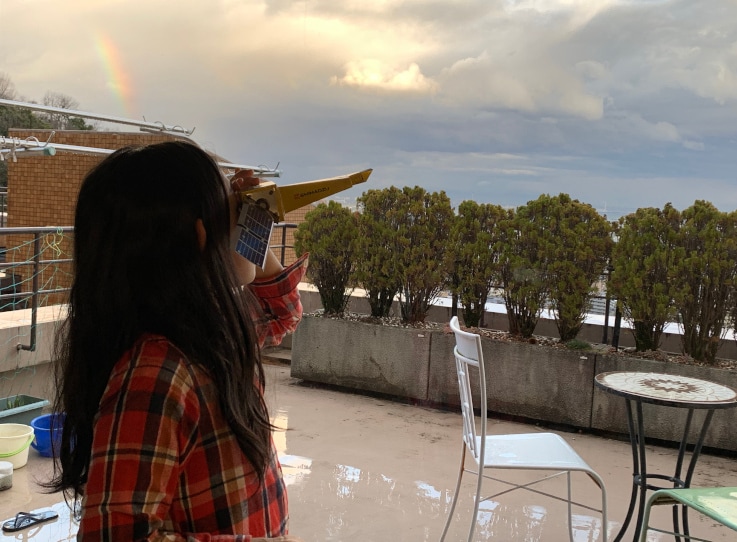 On February 20, Shimadzu hosted an online hands-on program for kids as part of the Future Scientist Training Course: “Let’s experience the wonders of science!” held in Nakagyo-ku, Kyoto City. The course was one of the events organized for the Keihanna Hands-on Science Festival that took place between February 13 and 28, 2021.

This is a project for kids, called Shimadzu Hands-on Analysis School: “Observe light by making your own Satellite Hisaki spectroscope!” The idea is for children to make a papercraft version of Hisaki, which is a Japanese spectroscopic planet observatory. The children are taught how to use the spectroscope to make observations of light. They build the satellite out of cardboard cutouts by following instructions on a video. 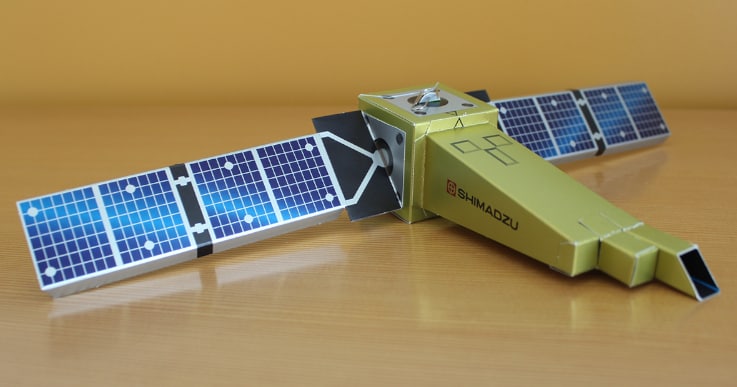 ”Find out how animation works: Let’s try making a phenakistoscope!” is a program produced by the Shimadzu Foundation Memorial Hall that helps children learn how animations and movies work, using a papercraft version of the phenakistoscope, an experimental apparatus invented some 180 years ago. 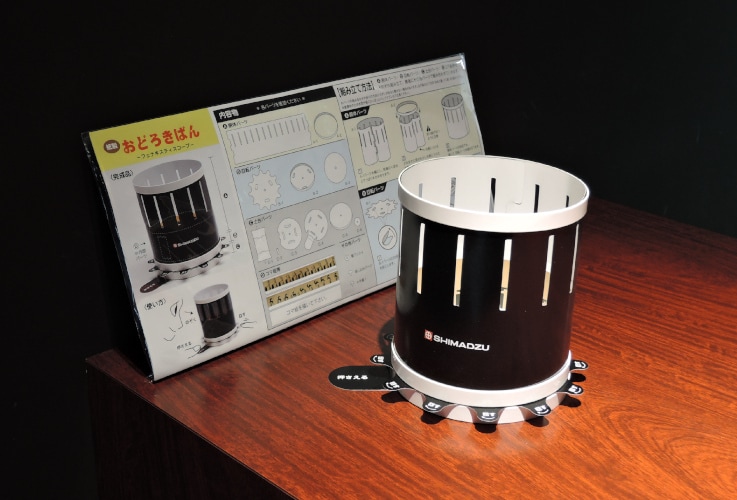 The Keihanna Hands-on Science Festival is a series of events for children, designed so they can experience the wonders of science and feel its excitement. Academic and research institutions as well as private businesses located in the Keihanna Science City and the surrounding areas take part in the festival. K-Scan, the network promoting science communication in the Keihanna area, is the event organizer.

The Festival was held this year at Keihanna Plaza (in Seika, Soraku District, Kyoto Prefecture), and was also made available online.

Over the 16-day period, there were 52 participants in the Shimadzu Hands-on Analysis School and 18 children took part in the event held on February 13 by the Shimadzu Foundation Memorial Hall, “Find out how animation works: Let’s try making a phenakistoscope!”

Keihanna Hands-on Science Festival: Comments from the Children, with Photos

Here are a couple of comments made by children who took part in the Shimadzu Hands-on Analysis School: “The finished Hisaki spectroscope was cool!” and “I was surprised what a big difference there was between individual lights because of the difference in color! I didn’t expect there would be that much change depending on the kind of light I looked at.” 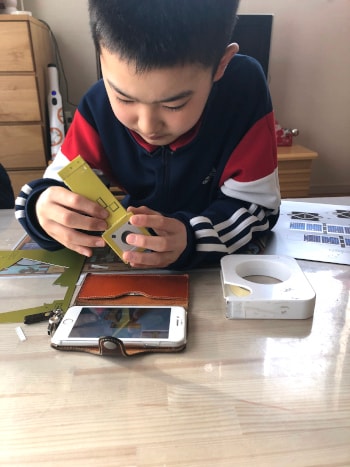 Here are some of the comments made by the children who took part in ”Find out how animation works: Let’s try making a phenakistoscope!” – “It was my first time to learn something online so I was nervous, but it turned out to be fun. Making the phenakistoscope was difficult but it was great when I turned it round and I could see that the pictures really moved,” and “Once I’d made it, I was really happy. You can create an animation using any kind of paper and you can use it again and again.” 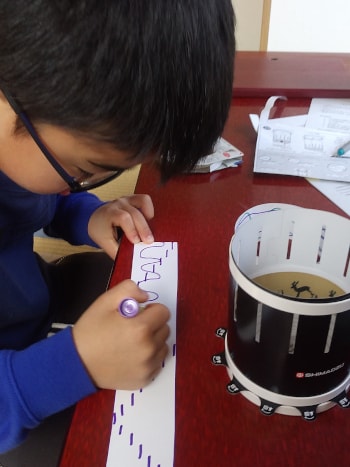 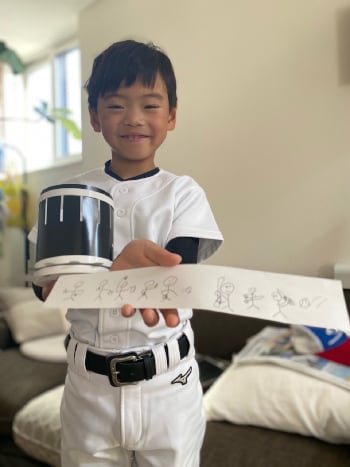 The Future Scientist Training Course: “Let’s experience the wonders of science!” was an online event held on February 20 as part of the 150th anniversary celebration of the founding of Seimikyoku in Kyoto. (Seimikyoku was a chemistry research and training institute.) Kyoto City’s Nakagyo-ku Ward Office sponsored the event, supported by Shimadzu Corporation and the Shimadzu Foundation Memorial Hall.

Seimikyoku was the hub of modern industrialization in Kyoto at the time of the Meiji Restoration in Japan some 150 years ago. The founder of Shimadzu Corporation, Genzo Shimadzu Senior frequently visited the institute. The knowledge and skills he acquired there led to the founding of the business in 1875, which explains our strong association with Seimikyoku.

The event was attended by a total of 37 children, who were either residents of Nakagyo-ku or were at primary schools in the ward. First, the children were told about Seimikyoku and Genzo Shimadzu from the Shimadzu Foundation Memorial Hall, followed by a demonstration of an experiment using devices in the Foundation’s collection. Then the children were divided into two groups, each having an online lesson and a workshop.

Future Scientist Training Course: Comments from the Children, with Photos

Children who took part in the Shimadzu Hands-on Analysis School made the following comments: “I saw different kinds of lights as beams using the spectroscope. It was interesting seeing how light looks different depending on which light you look at,” “I enjoyed listening to the explanation about the spectroscope,” and “The tour of Shimadzu Corporation was very interesting.” 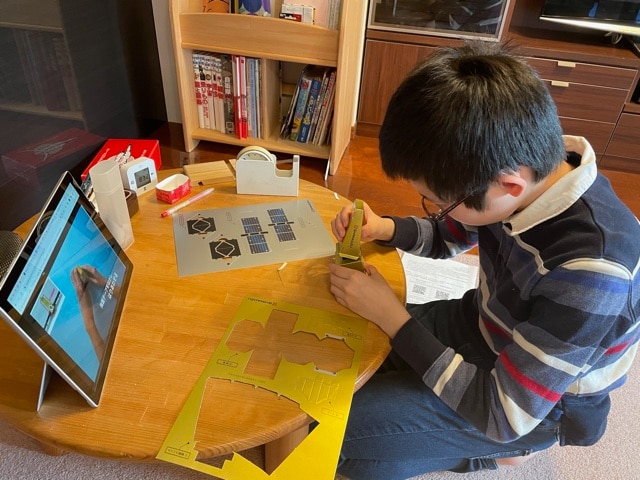 Here are some comments from the children who took part in “Find out how animation works: Let’s try making a phenakistoscope!” – “It was interesting to see that it works by using visual afterimages. I enjoyed doing the craftwork. The instructions were easy to follow. I want to do another one,” and “I want to create an invention like this.”

One parent said, “This was a very interesting event to participate in, both for my son and myself. It was good not only to learn about the phenakistoscope but to get to find out more about Shimadzu Corporation which is near our house and also about the history of science in Kyoto. 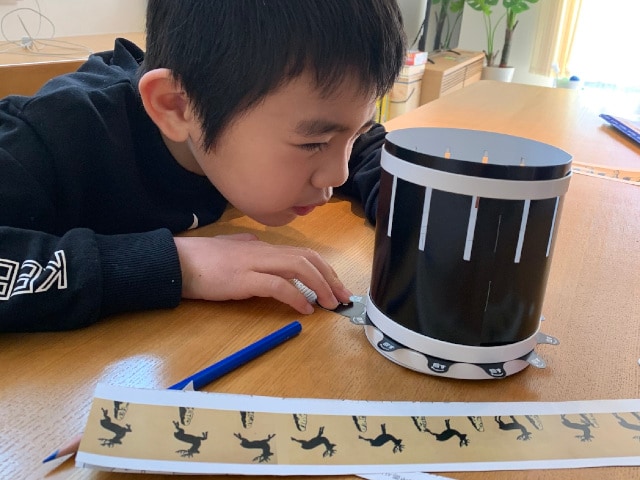 Thank you very much to everyone who attended, for sending in many photos, comments and observation records. All our staff were highly delighted to see them. We hope you will take this as an opportunity to investigate something intriguing that has made you ask “why?”

We are pleased to have created an activity that is unique to our museum, with a program that incorporates the history of Kyoto and of Shimadzu Corporation as well as experiments and handicraft. Because of the COVID-19 pandemic, we are restricted in our activities at present, but we hope to initiate new projects including workshops in the future.