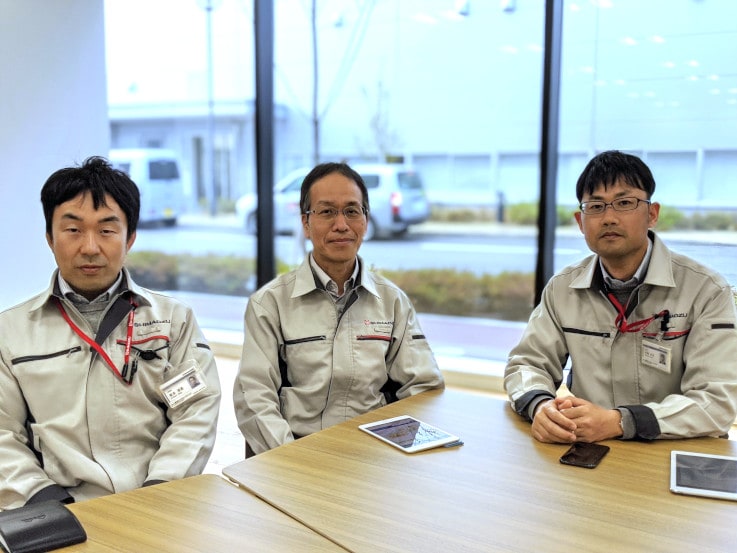 A smartphone application called “Amemil” for iOS provided by Shimadzu Business Systems Corporation is now available in English. Amemil is a weather app which delivers real-time information on rainfall by means of AI (Artificial Intelligence) and AR (Augmented Reality).

We interviewed three developers for this project, Tetsushi Okuyama, Jungo Arimoto and Hisashi Kataoka, to ask about the aims of providing English-language support and the recommended uses. All three are certified weather forecasters.

What is the smartphone app “Amemil”?

Amemil is an app that displays approaching rain clouds using AI and AR. AI has already learned the information provided by weather forecasters to tell you about rain clouds, temperature and weather in the area. The app can also inform you of rainfall forecasts within an hour via sound and video of weather radar.

With the AR function, nearby rain clouds, rain and puddle ripples are displayed on-screen; this information can be combined with images captured by a smartphone camera to obtain the amount of rain.

On 30 May 2021, Amemil for iOS will be available in English, making the app more convenient for English speakers in Japan!

Some features are also available for the Apple Watch. Weather commentary of Amemil using AI is also available on smart speakers with the virtual assistant “Amazon Alexa.” 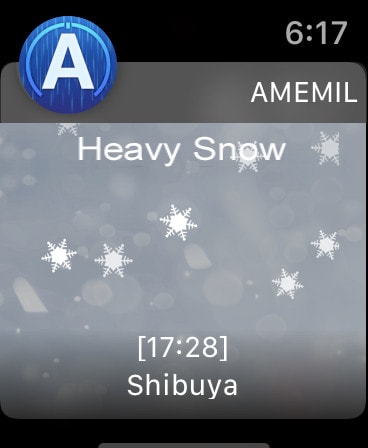 Amemil was developed and is provided by Shimadzu Business Systems Corporation, a member company of Shimadzu Group. Although its primary business activities are development and operation of information systems for the Shimadzu Group, the developers of Amemil work on weather-related projects, which fall under their new business domain.

The weather business was launched in 1999 as a result of an in-house venture scheme. Team members also learned about the AI technology used in the app from scratch. Another advantage of Amemil is that the app learns directly from the forecasters’ knowledge.

Aims and background of English-language support

We asked the team members about the aims and background of the English-language version of Amemil.

Arimoto: We thought that Amemil could be useful for inbound tourists and people coming to Japan for large-scale sports events.

Arimoto: There are about 1,000 weather reports provided by Amemil through AI. We translated the reports ourselves, one by one, using tools and visual checks. We also had to shorten the English text to fit the size of the screen. We developed the program in parallel and completed it in about six weeks.

Kataoka: The app is available for download in the U.S. from 3 June. We hope many people will use it.

Okuyama: Going forward, we hope to make Amemil for Android available in English, for iOS and Android in Chinese.

The program is being developed by two team members, including Arimoto. We were very surprised at the speed of development by such a small group.

Use of Amemil as recommended by the developers

Amemil is useful when the weather is unstable. What is the developer’s recommended use for this app?

Arimoto: We frequently hear from users that the “rain notification” feature which gives push notifications of rain forecasts within an hour is helpful because it tells them about approaching rain clouds. It can be useful to open the app from the notification and check the AR for information on the expected rain.

Kataoka: We are very pleased to see positive reactions to the app in reviews and in social media. Sometimes, users point out issues that we were not aware of. We take their feedback into account every day.

Okuyama: Since the release of the app in 2013, many users have continued to use it. We would like to keep developing as rapidly as possible in order to update it with new technology. We hope that it will be useful for disaster defense.

We thought that the number of downloads might have declined with fewer people venturing out due to the stay-at-home policy, but the impact was minimal. We felt that it was important to rapidly bring in something new and useful.

In 2021, the rainy season began earlier than in any other year in recorded history. We also asked about this year’s Japanese weather trends and expectations.

All: This year, we had a mild winter and a warm spring, and the cherry blossoms bloomed quite early. Also, as the meandering westward winds in the sky accelerated the northward movement of the seasonal rain front, the rainy season started quite early in the western part of Japan.

All: (As of 4 June) The rainy season has not yet started in the Kanto area; however, an early start to the rainy season does not necessarily mean an early end, which may be more or less normal.

This team has also been involved in operation of the weather information website for smartphones “Otenki JAPAN” and forecasting of cherry blossom blooming times using AI. Please keep watching for future unique initiatives by the team.

* Apple Watch is the trademark of Apple Inc.
* Amazon, Alexa and all related logos are trademarks of Amazon.com, Inc. or its affiliates.