Ghost peaks, which have a variety of causes and can take a long time to remedy, can be problematic for liquid chromatographs. To combat these problems, the Ghost Trap DS, a mobile-phase cleaner, was developed after a request from the Daiichi Sankyo Company. Since the product was launched in May this year, it has been used by many customers and has played a role in overcoming several problems. The background to the development of the Ghost Trap DS and opinions on its applications are introduced below. 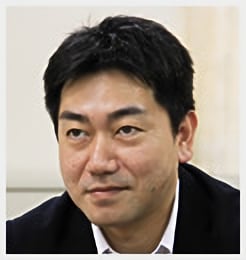 Before we discuss the Ghost Trap DS, could you tell me details of the work you perform using LC?

In the drug development department, we develop analytical methods for future/new drug applications and for factory production.

Considering the background to the development of this product, I assume you had some issues with LC during your actual work. What sort of phenomenon occurred that gave you problems?

When performing gradient analysis during the process of developing analytical methods for quality control applications, ghost peaks originating in the instrument, water, or sample would sometimes appear. These ghost peaks inhibit analysis and we used to have to handle them by changing the gradient analysis conditions or the type of solvent or buffer. However, since an analytical method can be used in many situations if ghost peaks do not appear, we wondered if there was a way to get rid of them.

Once ghost peaks do appear, it takes a long time to get rid of them, doesn't it? What is the longest time you have spent handling this problem in the past?

It is difficult to express this in terms of time. For instance, ghost peaks once appeared due to using a different instrument after we had finally completed an analytical method that achieved full separation, obtained validation, and transferred the technology to the factory or contract research organization. Changing the analytical method for which validation had already been obtained after pursuing the cause of the ghost peaks must have resulted in an enormous total time and cost.

So the problem occurred when the analytical method that you established was transferred to another location?

That's right. And the major concern was that we didn't know if the ghost peaks originated in the instrument or due to something else.

I guess they are called "ghost peaks" because their cause is unknown. What did you think caused them?

Everybody takes turns using the laboratory instruments. They use a variety of mobile phases and different solvents every day, so it is quite possible that slight contamination originated in the instrument. It is also possible that evaporated solvents in the environment can be absorbed and affect the instrument. I also believe that ghost peaks are produced by the buffer or other reagents in some cases.

So it is difficult to eliminate ghost peaks when substances are absorbed from the atmosphere or when the instrument is used for multiple purposes in different environments in different laboratories, isn't it?

Please tell me about the features of the Ghost Trap DS that we jointly developed.

The Ghost Trap DS is like a cartridge-type column that is inserted into the LC line to eliminate the ghost peaks inherent in the instrument. It offers great benefits in our work by eliminating the need to change the analytical method or gradient program pattern. The Ghost Trap DS can be connected just downstream of the mixers to clean up the mobile phase solvent before it enters the column in order to handle the ghost peaks that arise after the solvent and buffer are mixed together.

Products that simply clean contaminants from the mobile phase were available previously, as were remedies involving using the ODS column to remove contamination from the mobile phase under reverse-phase analysis conditions. But the Ghost Trap DS has the great benefit of working even with organic solvents, doesn't it?

Yes, that's right. Previous products were ODS or polymer. These seem to adsorb contaminants, but actually elute them out after a temporary delay. After all, the contaminants elute when a solvent flows subsequently. On the other hand, the Ghost Trap DS fully adsorbs contaminants to eliminate these concerns and it can also be used with organic solvents. I find it very easy to use.

How satisfied are you with Ghost Trap DS?

Ghost peaks are the biggest headache that I face. Without Ghost Trap DS, I'd have so many problems. I wouldn’t make any progress at all. I am extremely satisfied with Ghost Trap DS.

I am really happy to hear that. Can you give me some suggestions about using the Ghost Trap DS or describe some significant applications for it?

I believe it should be permanently attached to all liquid chromatographs. In our laboratories and in the factory, the LCs are used under different conditions from day to day. Using the Ghost Trap DS prevents ghost peaks derived from contamination originating in the instrument. I think the Ghost Trap DS should be attached to the liquid chromatographs as a matter of course, rather than for certain analytical methods only.

The idea is to attach it to the instrument in the same way that an inline filter is attached to a pump, isn't it?

When I think about how ghost peaks appeared when analysis was performed out-of-house, by contract research organizations, for example, I believe all such problems could be solved by attaching the Ghost Trap DS to each LC.

I think the Ghost Trap DS is already quite satisfactory with conventional LC. However, both our company and the world in general are starting to shift toward high-pressure HPLC. Naturally, with UHPLC the analysis times become shorter and a lot of compressed peaks are produced, but ghost peaks appear as well. I'd like to see the development of a Ghost Trap DS that can operate under high pressures.

So, you would like to see a Ghost Trap DS that is compatible with UHPLC? We will try hard to commercialize that.

Yes, please. That would be good.

Although the cartridge-type product is the best solution from an environmental point-of-view, it could be difficult to make a cartridge-type Ghost Trap DS that can handle UHPLC. In addition, as the dead volume more readily affects chromatograms, special measures would be required when connecting the Ghost Trap DS downstream of the mixers. But, considering the great cost and effort required to solve the problems we faced before, I would be very happy to see even a column-type device completed.

How durable would it have to be for use in a factory, for example?

The bottom line is that it can continuously eliminate ghost peaks when pumping to an LC for an entire day. The longer the better from the factory productivity viewpoint, of course, but the best solution would be a device that can be installed for a week when pumping every day, as that would allow most cycles to be completed.

In principal, I think it should last at least a week.

We did a lot of trials before, but they didn't go well. But by working with Shimadzu, we were able to commercialize the product. I think that LC is likely to proceed in a different direction moving forward, so development is still not complete. I hope we can continue to work with Shimadzu in the future.

I hope so, too. By the way, I think that the name Ghost Trap DS is a bit different from the names Shimadzu has used for equipment in the past. Our sales people once asked me what it means. What do you think about this product name?

The "D" stands for Daiichi Sankyo and the "S" stands for Shimadzu. As we refer to our own company as "DS," this name is extremely easy to remember. Even so, I felt a little embarrassed to say "Ghost Trap DS" when I was first asked by someone in my company what name I had decided.

So that name made quite an impact.

Some foreigners seem to find the name unusual but I think it is an interesting name. When people ask the meaning of DS, I think it leaves a lasting impression.

What are your opinions and requirements with respect to Shimadzu LCs?

I have been satisfied with Shimadzu LCs since the days of Prominence. The Nexera is also highly regarded in our company and I hope to use it more and more in the future. One request I would like to make is for a comprehensive range of UHPLC columns.

By "range of columns," do you mean the functional groups than particle size?

So, you are not talking about C8 or phenyl columns, for example, but the type of ODS columns. You mean that you would like to see ODS columns with different properties, don't you?

That's right. The level of analysis and level of sensitivity demanded today are much higher than in the past. Just a slight difference in the column can increase analytical options to make separation possible. In addition, analysis time is reduced by using high-pressure-resistant systems. With this in mind, the use of UHPLC instruments, no matter how good, will not be established without suitable columns that can withstand the high pressure. I'd like some support for that.

Finally, what sort of impression do you have of Shimadzu?

The response from other manufacturers leaves room for improvement, but Shimadzu always meets all our requirements down to the last detail. That is the impression I have of Shimadzu. 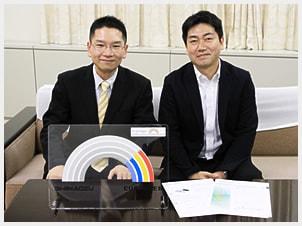 Comments About the Interview

There are many causes of ghost peaks and it is often difficult to eliminate them. The major feature of the Ghost Trap DS is its ability to eliminate impurities from organic solvents. It can be installed just downstream of the mixers, at a position near the autosampler. We will be very happy if the product contributes to reducing the time that the customer spends eliminating ghost peaks.
Development of this product commenced in response to a request from Mr. Konno. We believe that listening to customers provides an extremely important opportunity for manufacturers. We will continue to develop products that meet the requirements of our customers to the maximum degree possible. We hope for your ongoing support in the future.