On the occasion of Shimadzu's 50th year of producing mass spectrometry instruments, we talk to researchers using Shimadzu MS instruments in their daily work and ask about their expectations for Shimadzu and the future of MS technology.

Main field of study:
Pesticide residues and contaminants in food and the environment

1. How did you become familiar with Shimadzu?

I remember having Shimadzu instruments since I first started in the laboratory.
In 1980, when I joined the laboratory, there was already a gas chromatograph, model 6A coupled to FID which was in operation until 2005. Soon we had other equipment from Shimadzu: other chromatographs, spectrophotometers, balances.
In 1992, the government of Japan donated a mass chromatograph, model GCMS-QP1000. It was a revolutionary instrument in our university. It had an accessory to perform direct injection, which met the needs of many groups studying Synthetic Organic Chemistry at the time. Also, it was a great novelty for us to have the possibility of carrying out ionization at 20eV. This feature allowed us to carry out several structural elucidations of compounds that are impossible to perform at 70eV. This equipment worked very well for about 10 to 12 years.
In 1998, a series of chromatographs were coupled to specific elective detectors such as FPD, NPD, ECD and also a GCMS-QP5050, which was used for 15 years, for the structural determination of volatile natural products such as essential oils and fatty acids, among others.

2. What is your main field of research, and how are you utilizing Shimadzu equipment?

Gas chromatographs coupled with specific detectors allowed us to start investigations in an area absolutely new in Uruguay. At that time, it was still new because the scope of the use of pesticides in the country was not known for sure.
We conducted studies with FPD, NPD and ECD until 2012, when we were able to purchase a GCMS coupled to a single quadrupole detector which we used extensively to determine pesticide residues in numerous matrices.
These advances allowed us to finally buy a GCMS coupled to a triple quadrupole detector, the GCMS-TQ8040, which we soon upgraded to the TQ8050 model. This model represented a radical change in our detection capacity, in the selectivity with which detections were achieved, and with certainty in how values were achieved.
Naturally, this allowed the opening of a series of lines of investigation in the group that were deepening: multicontaminating methods were developed with great sensitivities. For example, it was possible to detect, PCB and pesticides in a single run, at levels required by the authorities to determine whether or not their use in certain foods was valid or whether the pesticide posed a risk to the environment.
Moreover, it has been possible to reach extremely small levels of concentration, on the order of nanograms, for the detection of PCB in breast milk, for example.

3. What are your reasons for choosing Shimadzu equipment?

What I can highlight from Shimadzu's equipment is that when an academic institution like a university or research group thinks about buying equipment, there are basically two main aspects to consider: one is the robustness. The choices made by other colleagues and their recommendations are very useful to make the decision. However, most of the time, it ends up deciding on the technical service.
Shimadzu’s technical service in Uruguay is particularly competent. They have always been very receptive to our doubts, concerns and complaints and have always endeavored to comply with them in time and form. I believe that this combination is what makes us, in our first considerations, always lean towards Shimadzu equipment.

4. What trends are you seeing in your field with regards to the use of mass spectrometry?

Pesticides are perhaps one of the most interesting areas with the greatest possibility of development in mass spectrometry, with regards to its application to the detection of pesticide residues and their metabolites in biological fluids such as breast milk itself, or even blood, urine or saliva.

5. What are your expectations for Shimadzu and for MS technology in general in the future?

We hope to move on to detecting unknown compounds using mass detection in food environments. Often the degradation products of pesticides and contaminants are more dangerous than the original molecules. So, it is important to move forward in detecting, identifying and understanding the mechanisms of adding these metabolites that may pose a greater health risk.
We hope to be able to advance to this field that is not currently being studied in our country. 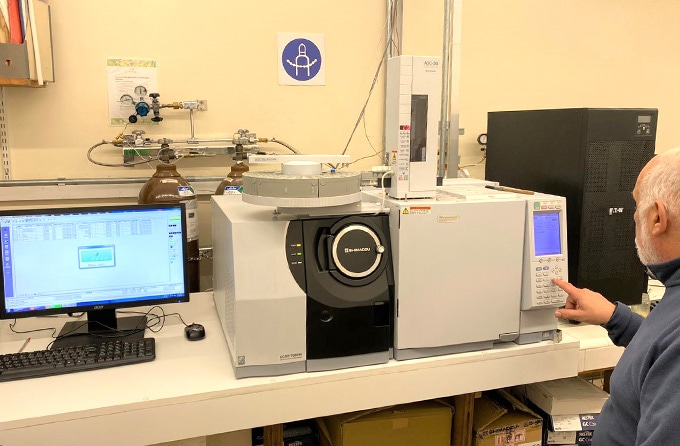 Back to user interview index