Metal reacts with carbon monoxide (CO) to generate carbonyl complex and there is a change in the surface morphology. This behavior is used in engineering and chemical fields, such as catalytic chemistry.

Regarding the way in which the surface of metal changes when it comes in contact with a very small amount of CO gas, there are cases where materials with simple structures, such as those consisting of single crystals, have been studied at the atomic level using ultrahigh-vacuum STMs.(1)(2)

Here, we present examples in which the macro-level changes in surface morphology that occur when thin films of the polycrystalline metals nickel (Ni), cobalt (Co), and platinum (Pt) come in contact with CO gas are observed using an STM in a gas atmosphere (Shimadzu WET-901 Environment-controlled STM). This is the first time for an Environment-controlled STM to be successfully used to observe changes in the surface morphology while heating the specimen and blowing gas onto it, using a specimen and atmosphere that are so close to the actual reaction system.

Fig. 1 shows the system for blowing gas into the environment-controlled chamber and for heating the specimen.

By blowing H2 gas onto the specimen surface in a vacuum, oxides at the surface can be reduced and clean surface can be obtained. CO gas is blown onto this surface and the effect is observed with an STM. 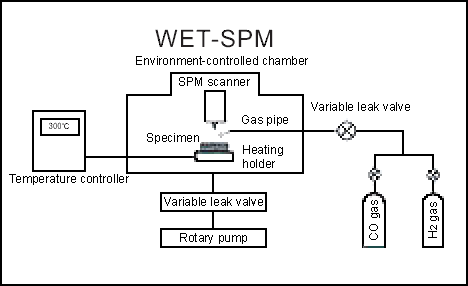 First, in order to remove the oxygen at the nickel surface, H2 gas is blown onto it in a vacuum. Fig. 2 shows the image obtained by STM observation before H2 gas was blown onto the specimen. Fig. 3 shows the image obtained with the same field of view after H2 gas was blown onto the specimen. In the latter case, a stable image was obtained and the island-shaped particle clusters can be seen clearly. This is probably because the metal surface was exposed when the following reductive reaction took place:

The large cluster probably consisted of CO that was adsorbed by the nickel surface. When blowing was stopped, it became detached from the surface.

Fig. 10 to Fig. 12 show sequential images obtained with the same field of view when CO gas was blown onto the specimen with higher flow rates (at a pressure of 1.0 x 10-4 Torr in the chamber). Fig. 13 and 14 show the images obtained after blowing was stopped.

One possible explanation for this change in surface morphology is as follows. It is possible that, when the blowing of CO gas with relatively high flow rates was stopped, nickel carbonyl complex was generated, it moved away and became detached from the nickel surface, and as a result the surface was depleted. In this scenario, nickel carbonyl complex is generated by the following reaction:

Also, through repetition of the same experiment, it was discovered that, even in nickel surfaces on which the particle clusters are evenly spread, there are parts that adsorb CO readily and parts that do not.
The specimens used in this experiment were provided by the National Institute of Materials and Chemical Research.