Polymers are an indispensable part of everyday life in the modern age. They are used in a wide variety of forms, from elastic bands, wrapping, and shopping bags to automobile parts. Laboratory film, which is often used in research laboratories, is a polymer. This film is highly airtight, it can be stretched by a factor of approx. 300%, and becomes slightly viscous after stretching. It is therefore used for a wide variety of purposes, such as sealing containers. Here, observation was performed with a scanning probe microscope (SPM), and particular attention was paid to the way in which the film stretches.

An SPM-9500J3 scanning probe microscope was used to observe the shape and the viscoelasticity of the film before it was stretched, and when it was stretched by factors of 200% and 300%. Observation was performed in an air atmosphere, the film surface was not processed, and the film was stretched in a direction closely corresponding to vertical in the display images.

In the image obtained before stretching, a depression of approx. 5 µm in diameter and 100 nm in depth (large arrow) and a ridge of 30 to 40 nm in height (small arrow) were observed. (See Fig. 1A.)When the film was stretched by a factor of 200%, cracks developed in the surface layer, blocks were formed, and these blocks separated in the stretched direction. The structure of the lower layer (arrow) could be observed in places where cracks occurred. (See Fig. 1B.) 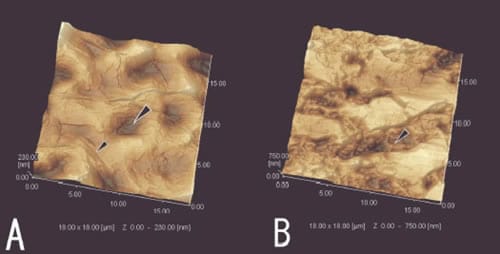 Fig.1 A: Prior to stretch B: 3D topography of 200% stretched surface

Fig. 2 shows a topographic image and a viscoelastic image* (Asind) obtained with the same field of view as Fig. 1B, with the film stretched by a factor of 300%. It can be seen in the topographic image (Fig. 2A) that the surface layer has been cut up into even smaller parts and separated even further (large arrow) and the structure of the lower layer (small arrow) covers quite a large area. It can be clearly seen in the viscoelastic image (Fig. 2B) how the molecules are oriented in the stretching direction (arrow). The slight viscoelasticity of this film probably originates in the way stretching causes the slightly viscous lower layer to come to the surface. 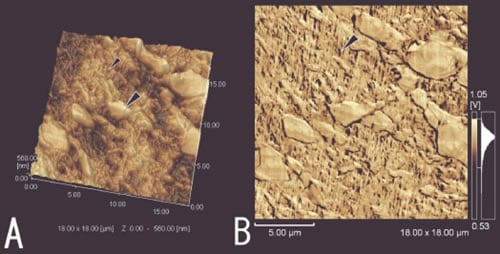 Using the SPM-9500J3, it was possible not only to observe the changes that occurred in the surface topography of the film when it was stretched but also, using viscoelastic images, to observe the molecular orientation and viscous properties. Of course, changes in the topography of the surface layer can be observed with a scanning electron microscope but it is difficult to observe the molecular orientation and viscous properties that are hidden in the lower layer with this kind of microscope. Observing the molecular orientation with a transmission electron microscope requires extremely advanced techniques and also takes time. Using an SPM, from the time the specimen was set, it took only a few tens of minutes to obtain the information described above.

In this way, using an SPM to observe physical properties can be very effective. It also yields good results with other polymers. For example, vscoelastic images can be used to observe the separation between styrene (bright phase) and butadiene (dark phase). (See Fig. 3.) Furthermore, because the SPM makes it easy to observe the changes in the surface of a specimen when it is heated, cooled, or subjected to humidity control, it is widely used in a variety of research fields.