Polymers are used in a wide variety of forms that we encounter in daily life. The surfaces of polymers, which typically have a lamellar structure, have an interesting form, and this is related to the transparency and strength of the material. Here, polyethylene and polypropylene films were observed using an SPM (scanning probe microscope) to simultaneously obtain 3D and elasticity images.

In the 3D images, the microscopic level differences on the surface can be observed. In the elasticity images, the lamellar structure is clearly visualized and it is possible to see the way the large molecules crystallize. (Parts where crystalline is more advanced, and which are consequently harder, appear brighter in the image.) Each image covers an area of 1 µm x 1 µm. These examples show how the SPM makes it simple to obtain important information about polymer films in air atmospheres. 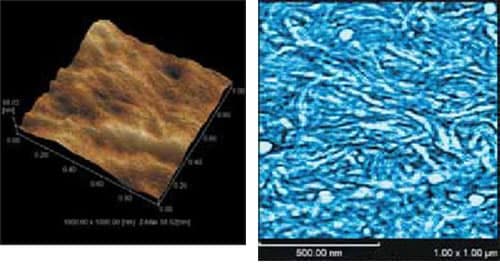 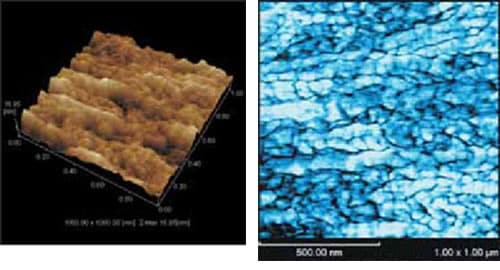