There is a close relationship between structure and function. In particular, living organisms are known to contain a large number of structures and materials that possess unique functions. These have developed over the 3.5 billion years of evolution that have passed since life started. It is thought that the process of identifying these structures, understanding the mechanisms, and using them in a wide variety of fields will be an important development area of checmical technology in the 21st century. It is also thought that the SPM (scanning probe microscope) will play an important part in this.

One well-known example of a naturally occurring material is silk. The proteins that silk consists of are mostly fibroin proteins. The extremely high biocompatibility of silk is illustrated by the way it has been used in the past as surgical thread. Functions such as the ability to adsorb fat have also been identified. Here, we observed the structure of the fibroin proteins that perform these functions.

Fig. 1 shows a 3D image of fibroin proteins. The scanning range covered area of 600 nm × 600 nm. The specimen was prepared by taking fibroin proteins from the cavity in the posterior silk gland of the silkworm (Bombyx mori), diluting them with distilled water, dripping the liquid onto a mica substrate, and air-drying it. The specimen was observed in air using Shimadzu’s SPM-9500J3 in dynamic mode (resonance mode).

Until now, judging from observations performed with ultrahigh-voltage transmission electron microscopes, it was believed that the fibroin proteins in the cavity of the posterior silk gland were fibrous. The observation performed here would suggest that they may, in fact, have a basic structure consisting of particles of approx. 20 nm in diameter, linked together like beads. Also, because of the deformation caused by air-drying, the height is only about half of the horizontal diameter. It is possible to conclude that the internal structure is not very precise.

The SPM can, then, be used to perform the observation of macromolecules such as proteins without any special treatment. Also, by enabling the observation of the secretory behavior of proteins, it promises new possibilities in cytologic research.

It is anticipated that the SPM will provide important data to understand the relationship between the structure of fibroin proteins and the functions described previously. 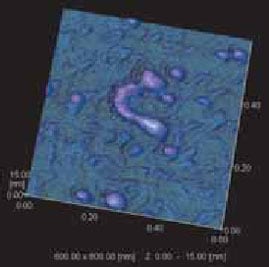