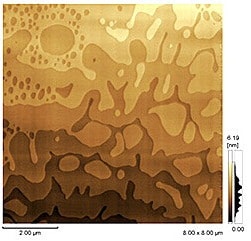 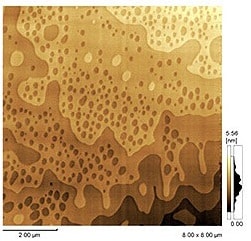 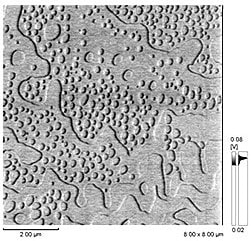 A DC electric field was applied to a monocrystal of TGS (ferroelectric tri-glycine sulfate). Observations were made of the cleavage surface of the sample with the spontaneous polarization direction aligned. The figures show the topographic images and the friction images (using lateral force (LFM)).
It was confirmed that no contrast in the friction image was apparent (excluding the contours) when the polarization was aligned. This result does not contradict the fact that friction image contrast reflects the spontaneous polarization orientation.
(Courtesy of Associate Prof. Makoto Iwata, Graduate School of Engineering, Nagoya Institute of Technology)