Observation of the Surface Shape and Electric Potential of Magnetic Tapes 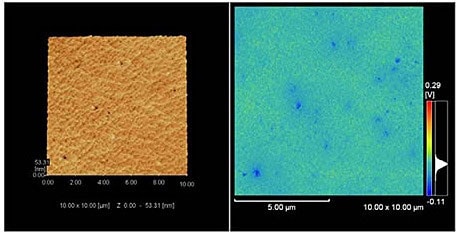 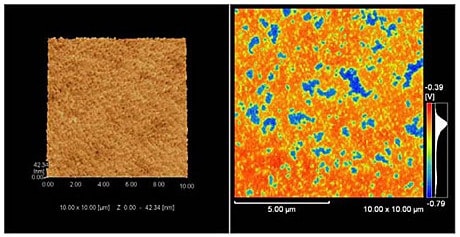 Two different brands of magnetic tape were observed in surface potential mode. The left side of the respective figures is a surface shape image, and the right side is a surface potential (KFM) image. From the shape images, it is evident that the surface coarseness is approximately the same.
In contrast, from the electric potential (KFM) images, it is apparent that while the in-plane distribution for magnetic tape A is approximately uniform, with magnetic tape B, an electric potential difference of several hundred mV is distributed in-plane. It is believed that the distribution of these potential differences likely reflects irregularities in the lubricant film on the tape surface.