Currently liquid chromatograph mass spectrometers (LC-MS) are increasingly being used in a wide range of fields, such as pharmaceuticals, environment, foods, and industrial materials. This page begins the first of a series of discussions regarding LC-MS systems.

What Are the Advantages of LC-MS?

In general, liquid chromatography (LC) separates the components of a sample based on differences in their affinity (or retention strength) for the stationary phase or mobile phase, then detects the separated components using UV, fluorescence, or electrical conductivity based on their properties. Such detectors primarily qualify substances based on retention time and quantitate substances based on peak intensity and peak area. Chromatography offers great resolution, but accurately qualifying and quantitating substances can be difficult if multiple components elute approximately at the same time, such as during simultaneous multianalyte analysis.
In contrast, mass spectrometry (MS) offers a highly sensitive detection technique that ionizes the sample components using various methods, then separates the resulting ions in vacuum based on their mass-to-charge ratios and measures the intensity of each ion. Since the mass spectra provided by MS can indicate the concentration level of ions that have a given mass, it is extremely helpful for qualitative analysis. That is because mass is information particular to specific molecules and MS enables obtaining that information directly. However, that only applies when measuring a single component. If multiple components are injected simultaneously, it becomes extremely difficult to analyze the spectra.
Therefore, LC-MS systems combine the outstanding separation resolution of liquid chromatography with the outstanding qualitative capabilities of mass spectrometry. The mass spectra obtained from these scan measurements provides molecular mass and structural information for eluted components, which supplements the qualitative information based on retention times obtained using other LC detectors (Figure 1). 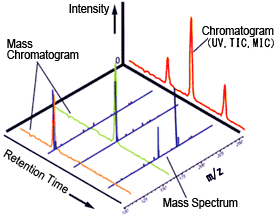 In addition, SIM (selected ion monitoring) measurements detect substances based on mass, which is a highly-selective parameter. This enables quantitative analysis that avoids the effects of impurities even when separation by LC is inadequate. In terms of providing both broad applicability for a wide range of substances and high selectivity, mass spectrometers offer excellent characteristics as an LC detector.

Mass spectrometers have been used as a detector for gas chromatography (GC) systems since the relatively early days of mass spectrometry and their advantages are widely recognized. GCMS provides a very effective means for separating and qualifying substances, but its applicability is limited to gases or volatile compounds with relatively low molecular mass, and samples with high thermal stability.

In contrast, if the substance is dissolved in a mobile phase (liquid), then LC is able to analyze even least volatile or thermally-unstable compounds that are difficult to analyze using GCMS. In other words, one of the advantages of LC-MS is its broad applicability.

Mass spectrometer systems include a device for introducing samples (such as an HPLC or GC unit), an interface for connecting such device, an ion source that ionizes samples, an electrostatic lens that efficiently introduces the generated ions, a mass analyzer unit that separates ions based on their mass-to-charge (m/z) ratio, and a detector unit that detects the separated ions.
Many types of MS systems are available depending on the method used to separate ions. This example shows the components of a typical atmospheric ionization quadrupole MS system, commonly used as an LCMS detector (Figure 2). The atmospheric ionization unit is based on electrospray ionization (ESI), atmospheric chemical ionization (APCI), or other ionization methods, and serves as the ion source and interface with the HPLC system. Ions generated in this unit are stripped of solvent, then focused into a beam using an octupole or other means, then delivered to a quadrupole. Both a direct current and high frequency alternating current are applied to the quadrupole, so that only the ions with the target m/z ratio successfully pass through the quadrupole. The quantity of ions that reach the detector is converted to a signal and output to a computer. 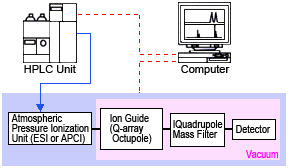 Fig. 2 Components of an LC-MS System