Until now, we have described mass spectrometry as a method used to measure the mass of atoms and molecules, but how does it actually measure mass? Starting with this page, we will spend then next few pages describing the mass spectrometer unit of LC-MS systems.

Role of the Mass Spectrometer Unit

Normally when we measure mass, we use a scale or balance, which relies on the Earth's gravity. So, how do you measure the mass of a molecule, which is so extremely small that its gravitational force is almost too small to measure?
The English physicist J.J. Thomson utilized the fact that the flow of charged particles bends in an electric or magnetic field to develop an instrument that could separate charged particles by mass number.

In his instrument, which used a cathode ray tube, cations with identical ratios of charge e and mass m converged along the same parabola. When he measure the neon gas molecule, the parabolas for 20Ne and 22Ne (both are monovalent cations) were slightly different, which proved the existence of isotopes (1912). If this electromagnetic interaction is utilized, ionized compounds can be separated and measured according to mass-to-charge (m/z) ratio.

As described earlier, the key components of a mass spectrometer consist of a sample introduction unit, ionization unit, mass analyzer unit, and ion detection unit. In recent years, most LC-MS system use atmospheric pressure ionization methods, such as ESI or APCI.
However, a wider variety of models have been used for the mass spectrometer unit, which separates the ions. In the past, magnetic sector models,quadrupole models, and time-of-flight models were frequently used for measuring organic compounds, but the relatively cheaper quadrupole models have gradually been increasing their share.

In addition, an ion-trap MS system that temporarily accumulates ions of a selected range before separating them by mass, and a tandem or hybrid MS system that combines multiple MS units have been developed as well (Table 1). These various types of MS systems each take advantage of their respective features and are used according to analytical objectives.

Magnetic sector MS has been used historically the longest (Figure 1). 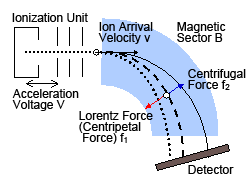 2 to 8 kV of high voltage is applied to ions generated in an ionization unit to accelerate them into a magnetic sector. According to Fleming's left-hand rule, ions are accelerated in a direction perpendicular to velocity v and the magnetic field, resulting in a curved path.

Ions experience a Lorentz force f1 from the magnetic field that can be calculated according to equation (1).

As the direction of an object's movement changes, a centrifugal force f2, expressed by equation (2), acts on the object.

For the ion to pass through the magnetic field region and reach the detector, it must travel along a curved path of a given radius. In other words, it must move with forces f1 and f2 in balance, as described by equation (3).

Meanwhile, the kinetic energy of ions accelerated by voltage V is described by equations (4)

In this case, the motion of ions satisfy equation (5). By keeping the ion acceleration voltage V constant and varying the magnetic flux B (or keeping B constant and varying V) in equation (5), a detector placed on the corresponding path radius r could detect any particular mass m.
In actual magnetic sector mass spectrometers, only one ion detector is used and both the acceleration voltage and curve radius are kept constant while the magnetic flux is scanned. This means that ions with different masses all pass along the path through the magnetic field, one after another, and reach the detector. One mass spectrum is obtained from each scan of the magnetic field.