This page follows from the page on Flow Injection-like Analysis Using a Column and further discusses the process of deciding analytical conditions for LC-MS.

Once you have come this far, all that remains is to decide the mobile phase ratio based on objectives. However, it's a process that can be time consuming. As a result, this process of changing parameters, swinging between hope and frustration, may be quite fascinating, but requires far too much time. In this case, we use a high-throughput column in an effort to significantly reduce this time. High-throughput analysis is used for simulation to check when the target compounds will elute, whether or not any contaminants interfere with analysis, and so on. Based on those results, candidate analytical conditions are determined, the final column length is changed to 150 mm, and the flowrate is set back to an appropriate level to complete the process.
Lately, due to a growing interest in high-throughput analysis, analytical conditions are increasingly used without careful examination if they are consistent with objectives. However, if there are many target compounds or they are in a complex matrix, then separation by chromatography can determine the success or failure of the analysis. Therefore, be careful not to make the decision too hastily.
Since the retention of some compounds are extremely weak in reversed-phase columns, the process sometimes requires more than simply deciding the ratio of organic solvent. One way to deal with this situation is A) to lower the column temperature, but to fundamentally solve the problem, typically B) the ion pair method is used. Ion pair reagents with relatively high volatility are used for LC-MS analysis. Probably it is best to use commercially-available products, such as perfluorocarbonates(for basic compounds) or dibutyl ammonium acetate(for acidic compounds). (HPLC-grade ion pair reagents cannot be used for LC-MS because they are equivalent to non-volatile salts.)
If analyzing unmodified amino acids, use an ion pair reagent for the amino group to detect them as positive ions(heptafluorobutyric acid, for example). In contrast, use an ion pair reagent for carbonates to detect them as negative ions(dibutyl ammonium acetate). Figure 1 shows an example of analyzing amino acids in soy sauce using heptafluorobutyric acid. 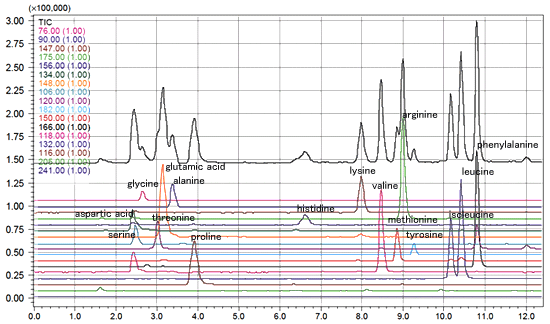 Separation is important for chromatography, of course, but if target compounds cannot be detected, then chromatograms cannot be obtained and there is no point in using chromatography. As indicated for procedures discussed earlier in this series, the most fundamental approach is to pay close attention to detection when deciding the separation conditions. The factor that has the greatest influence on detection (and ionization) is the mobile phase, so nothing would be more convenient than if separation could be improved using the same mobile phase.

Since different reversed-columns of the same type can have individual characteristics, one practical approach to solving this problem is to look for a column that is best suited to specific analytical objectives.
For example, the stationary phase in Shim-pack FC-ODS, VP-ODS, and XR-ODS columns all consist of octadecyl groups, but their separation behavior can differ depending on the component.

Another approach is to try a Synergi series column from Phenomenex (Max, Fusion, Hydro, or Polar), which have a stationary phase with unique characteristics.

Keeping the mobile phase and other analytical conditions fixed, these four types of columns would be used and separation compared. From those results, the column best suited to analytical objectives should be selected. Figure 2 shows the separation of pesticide components using the Max and Polar columns. The differences are often slight, but sometimes the change is dramatic as well. Therefore, trying this is more than worthwhile.

In addition, separation results can change depending on whether acetonitrile or methanol is used for reversed-phase analysis. Therefore, this provides another choice if frustrated by separation problems.

If an aqueous normal phase mode column (with hydrophilic retention, sometimes called "HILIC mode") is used for separation and an appropriate sample ionization mode and type of mobile phase are used, then the procedures described in this article series can be applied. The fact that polar compounds that cannot be retained or separated using a reversed-phase column can be analyzed using a mobile phase suitable for LC-MS is an extremely attractive advantage. Though there are problems with their column product offerings, prices, stability, and interfering substances eluted from the column (sometimes called mass bleeding), this mode provides an additional choice when considering analytical conditions, which should further increase the range of applicable samples for analysis.

This article series has described somewhat simplified approaches to finding satisfactory analytical conditions in as short a time as possible. Though simplified, in reality, they can be used for a significant range of compounds. If you are experiencing problems in establishing analytical conditions or in successfully analyzing a sample with given conditions, then try using these procedures. (Mu)

The retention of compounds in reversed-phase ion-pair chromatography is affected by factors such as the proportion of organic solvent in the mobile phase, the buffer solution concentration, and pH, just like regular reversed-phase chromatography, but additionally, the retention is also affected by type and concentration of the ion pair reagent.
See Also => LCtalk 27 in the LAB Ion Pair Chromatography - Differentiating When to Use Alkyl Sulfonates and Perchlorates