Furthermore, let's take qj(j = 1,2,... n) to be the normalized particle amount (difference %) corresponding to each of particle size intervals [xj,xj+1] and the total of all intervals to be 100%. Average value µ on the logarithmic scale can be calculated as:

The standard deviation defined on the logarithmic scale can be calculated as follows based on this µ: 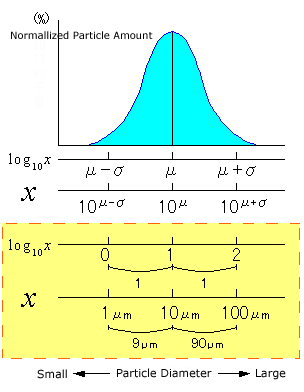