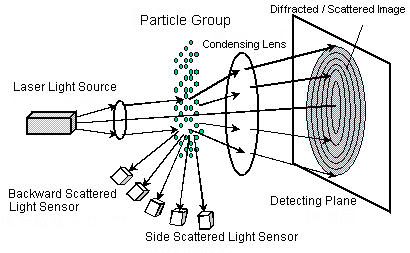 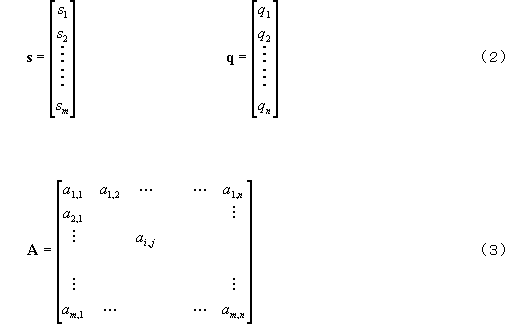 is the light intensity distribution vector. Its element si (i = 1,2, ......m) is the amount of incident light detected by each sensing element of the ring sensor and the side/backward scattered light sensors.

Namely, normalization is performed so that the total becomes 100%.

A is the coefficient matrix for converting particle size (vector) q to light intensity distribution (vector) s.
The physical meaning of the element of A ai,j(i = 1,2, ....m, j = 1,2, ....n) is the amount of light incident on the ith element of the light diffracted/scattered by the particle group of unit particle amount belonging to particle size interval [xi, xi+1]. To put it another way, this coefficient matrix A expresses the diffraction/scattering phenomenon itself.
The numerical value of ai,j can be calculated theoretically beforehand. To calculate this, the Fraunhofer diffraction theory is used when the particle size is sufficiently larger (ten times or more) than the wavelength of the laser beam used as the light source. However, the Mie scattering theory must be used in regions smaller than that. The Fraunhofer diffraction theory can be considered to be a superior approximation of the Mie scattering theory, which is valid when the particle size is sufficiently larger than the wavelength in the forward small scattering angle region.
To calculate the elements of coefficient matrix A using the Mie scattering theory, the absolute refractive index (complex number) of the particles and the dispersion medium (liquid medium) must be set. The least square's solution of particle size distribution (vector) q can be obtained using the following expression based on expression (1):