Generally, ion chromatography is used to analyze element ions and low-molecular ions that exist in a charged state in water.
Ions can be classified as inorganic ions, organic acid ions, amines, etc.

The general inorganic ions derived from a strong acid or strong base exist in water in the form of cations or anions. To achieve the appropriate elution strength, a combination of acid and alkali is used as the mobile phase for ion chromatography. Stable analysis with almost complete dissociation is possible when samples in the pH range from 3 to 11 are injected into the ion chromatograph.

Organic acids and amines (ammonium, etc.) each have their own inherent acid dissociation constant (pKa). For these substances, the solvent pH and sample concentration alter the balance between the dissociated (ionic state) and nondissociated state, which changes the proportion of substances existing in an ionic state that can be detected by ion chromatography. It may be impossible to obtain a linear calibration curve for some analytical conditions and analysis (detection) methods.

Ion chromatography can be performed using the non-suppressor method or the suppressor method. This is more than just the difference of whether a suppressor is installed. It also has a difference chemically. This is described below, using examples.
The non-suppressor method normally uses a weakly-acidic buffer solution or an aqueous solution of an acid as the mobile phase. Once the mobile phase has been prepared, its composition and pH remain unchanged in the analysis column and detector cell. Due to the buffer capacity and pH of the mobile phase, the target ions are separated and detected in a fully-dissociated state and a linear relationship exists between the concentration and conductivity.

With the suppressor method, as the counterions for the target ions are eliminated immediately before the detector to reduce the background conductivity of the mobile phase, the mobile phase composition differs during separation and detection.
As this change in composition alters the pH, care must be taken with how this affects the dissociation state when analyzing organic acids and amines (ammonium, etc.), in particular. It is well known that the calibration curve is curved for ammonium ions when using the suppressor method of ion chromatography.

(3) Beware of Calibration Curves for Amines!

Ammonium is in the following equilibrium state.

The state changes according to the pH of the mobile phase. Under acidic conditions, the equilibrium moves to the right and the abundance ratio of NH4+ increases. However, as the pH increases, the NH4+ decreases. Under high mobile phase pH conditions, dissociation becomes more suppressed and the NH4+ abundance ratio decreases as the sample concentration rises. This breaks the proportional relationship between the concentration and response, resulting in a curved calibration curve. 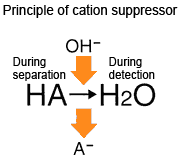 With the cation suppressor method, an aqueous solution of an acid, such as sulfuric acid or methanesulfonic acid, is used as the mobile phase. The sulfate ions and methanesulfonate ions are converted into OH ions inside the suppressor, such that the suppressor eluate is water (pH 7).
Consequently, the phenomenon described above occurs, and the calibration curve becomes curved. This effect becomes more pronounced if the suppressor efficiency is high. Naturally, this phenomenon does not occur with the non-suppressor method, as an acidic mobile phase is used. 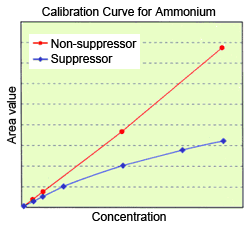 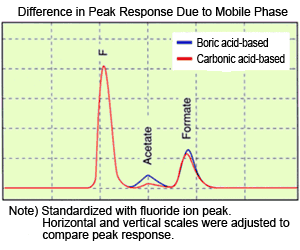