Yellow sand was observed in Western Japan in 2003 for three days starting March 25. 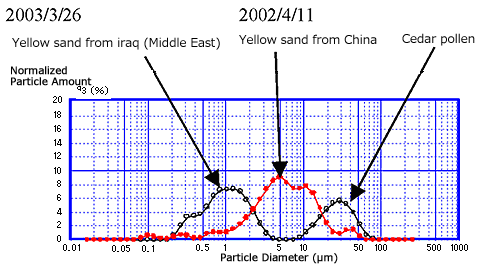 With the advance of global warming and drying, the adverse affect of yellow sand on the human body and the environment is a matter of concern. Actually, we feel amazed at the fact that sandstorms occurring in the Middle East affect Japan's air thousands of kilometers away. Differences in particle size of yellow sand that occur due to differences in geographical location also may need to be sufficiently investigated in the future.

Each of the data introduced here were collected by the SSPM-100 Sampler for Suspended Particulate Matter, and were measured on the SALD-7000 Laser Diffraction Particle Size Analyzer .

In the spring of 2002, unusually large amounts of yellow sand fell from the skies, causing a yellow haze in Japan's skies. In Japan, the effect of this, apparently, was the greatest in Sapporo in Hokkaido, Japan's northernmost island, so much so that people could not hang their washing out to dry because of the large volumes of dust. Moreover, it seems that Peking and Seoul suffered the most serious damage, with human casualties being reported and public alerts being issued.

After snow melts in spring, in the Gobi, Taklamakan and other deserts, large amounts of sand dust is blow up into the air by strong winds, after which it moves at a relatively low altitude (about 3,000 m) to eventually pour down on China, South Korea and Japan. Large particles fall down in comparatively short distances, while small particles are carried to far away places.

If global warming progresses and desertification is accelerated in all parts of the world, it is anticipated that the problem of yellow sand will grow increasingly serious. Yet, in Europe and America, phenomena like yellow sand, apparently, is not treated as that much of a problem due to the relationship between geographical and meteorological conditions, and research into it has not been advanced very much in these continents.

Accordingly, yellow sand is a problem facing China, Korea and Japan, and so will be researched mainly by these three countries in the future. The scope of influence of yellow sand and its particle size distribution are in a close relationship, and constitute an important subject of research.

In Okinawa Prefecture(Japan), Prefecture, coral reefs have suffered irreparable major damage due to the outflow of red soil into the sea.

Though sedimentation traps and sedimentation basins are being produced as countermeasures for preventing the outflow of sediment when carrying out land improvement projects, they are designed specifically for large sediment particle sizes of 200 µm or more.

Though new measures have recently been devised to prevent this, coral reefs that are already lost will not return.

We are faced by a number of issues that must be tackled, as typified by the removal of dioxin, sick building syndrome (formalin, etc.), removal of cryptosporidium from drinking water, emission suppression/separation/solidification of carbon dioxide or greenhouse gas, and countermeasures are being investigated to tackle these issues.
Countermeasures include ongoing development and use of numerous new materials such as active carbon, zeolite, molecular sieve, charcoal, ceramic membrane, hollow fiber membrane, photocatalyst, metal complex, carbon nanotube, and others.

There is something we should take note of here. That is, the majority of these have a micro (nanosize) structure and also have remarkable absorption properties. In other words, the measurement of specific surface area and pore distribution will be extremely important in evaluating these materials. Information on absorption properties can be obtained by applying the gas adsorption method, a typical specific surface area measurement method.