There is no generally standard method for laboratory extraction of carotenoids (Rivera et al., 2012). This is due to the wide variety of food products containing carotenoids, to the different genotypes of an organism or a product as well as to the potential differences between the different parts of the same food or sample. However, most extraction methods follow a common path consisting on the release of desired components from their matrices by disrupting tissue, followed by removal of the undesired components and a liquid-liquid or liquid-solid extraction (Figure 1).
Even though rarely reported in carotenoid studies, solid phase extraction (SPE) with typical sorbents e.g. C30 and C18, could be employed as well. Many different organic solvents have been used in the analysis of carotenoids and the selection of the appropriate one is not always easy to achieve. Besides the difficulties explained at the beginning of this section, the different polarities of the existing carotenoids and the structure of the analytical matrix and its components play also an important role when selecting a solvent for extraction. Usually, non-polar solvents as hexane are a good choice for non-polar (carotenes) or esterified carotenoids, while polar solvents as ethanol and acetone are more appropriate for polar carotenoids (xanthophylls). Additionally, the susceptibility of carotenoids to light, heat, acid or oxygen exposure has also to be considered when developing a method for carotenoid extraction. 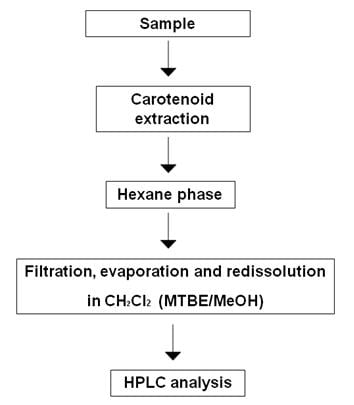