Is a single column separation sufficient for carotenoid analysis?

High-performance liquid chromatography (HPLC) represents the method of choice for carotenoid analysis; in particular reversed-phase LC (RP-LC) with both C18 and C30 stationary phases has been extensively employed (Craft et al., 1992) providing good separation for a wide range of carotenoids differing in hydrophobicity within a given structural class; on the other hand, normal-phase LC (NP-LC) on silica-based columns is largely employed for carotenoid class separation, according to different polarity (with retention increasing from hydrocarbons to xanthophylls), with mobile phases consisting of both apolar hydrocarbon solvents (hexane) and more polar ones, such as methyl-tert-butyl ether (MTBE), acetone, isopropanol or methanol.
As fas as detection is concerned, photodiode array detector (PDA) is the most common analytical method for determining qualitatively and quantitatively carotenoids; however, the spectra of many carotenoids are very similar and consequently, the identification of carotenoids requires more powerful detectors, like mass spectrometry (MS). In fact, MS instruments are used to overcome spectral interferences in UV-Vis and therefore, allow to achieve high sensitivity in complexes mixtures obtaining molecular structure information on the basis of the molecular mass and fragmentation pattern under tandem mass spectrometry (MS/MS and MS/MS/MS). As ionization technique, Atmospheric pressure chemical ionization (APCI) is the preferred one in the analysis of carotenoids since it forms abundant positively or negatively charged molecular ions or protonated and deprotonated molecules of both carotenes and xanthophylls (van Breemen et al., 2012).
The high complexity of many natural samples, especially foodstuffs, often overwhelms the separation capability of any one-dimensional LC (1D-LC) techniques, given the high number of carotenoids with high degrees of structural similarity that may be found, possibly leading to co-elutions, often difficult to detect. The employment of multidimensional chromatographic techniques may represent a viable tool in order to improve both peak capacity and the resolving power ( Herrero et al., 2009).
Multidimensional chromatography (MD) in the “comprehensive” mode (LC×LC) has emerged as an interesting alternative to analyze complex matrices, since it allows the combination of two or more independent or nearly independent separation steps, increasing significantly the separation power of the corresponding 1D-LC techniques. The record of the detector at the outlet from the second dimension (2D) column is transformed into a 2D chromatogram, which is represented as a contour plot showing the separation time in the second time versus the separation time in the first dimension (1D). In the 2D contour plot, each component is represented as an ellipse-shaped peak, defined by doubled-axis retention time coordinates. The formation of a chemical class pattern on the second dimension space plane offers great potential for the identification of “unknown” peaks. Results obtained from the NP-LC×RP-LC analysis of free carotenoids and carotenoid esters in a red chili pepper extract are shown in the contour plot of Fig. 2, extracted at a 450 nm wavelength (Cacciola et al., 2012). Chromatography on the cyano stationary phase allowed a good separation of the carotenoids in groups of different polarity in the first dimension, as can be seen from the ellipses in Fig. 2, with retention times increasing in the order: hydrocarbons 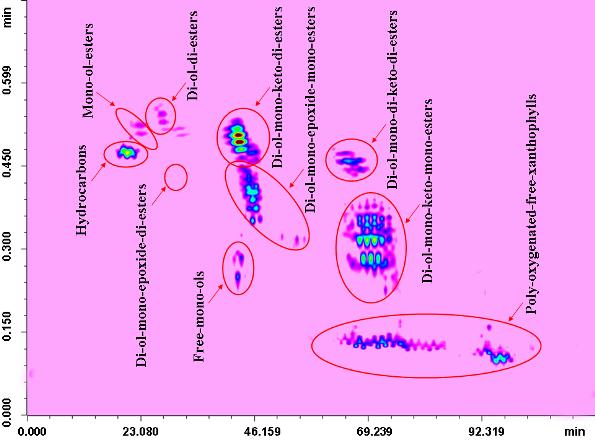