Fast Analysis of Gingerol and Shogaol in Ginger

In addition to its use as a spice, Ginger has been used as an herbal remedy from ancient times. The efficacy of ginger has attracted attention in recent years and health foods containing ginger are now found more frequently. Gingerol and shogaol are well known components of ginger and many homologues of these components exist; 6-gingerol is the most abundant component in ginger. When heated, gingerols undergo a dehydration reaction to form shogaols. The shogaol content depends on the type of ginger. The high-speed analysis of 6-gingerol and 6-shogaol (Fig. 1) in ginger is described below.

A Shim-pack XR-ODS (2.2 μm particle size) high-speed, high-separation column was used for analysis. Table 1 shows the analytical conditions. A column washing stage was added to elute out the impurity components, which are strongly retained in the column during analysis using an actual sample under these conditions. Fig. 2 shows the chromatograms for a standard solution of 6-gingerol and 6-shogaol (100 mg/L each component, methanol solution). After the pretreatment shown in Fig. 3, the ginger was analyzed under the analytical conditions in Table 1. Fig. 4 shows the resulting chromatogram. This method achieved fast analysis of 6-gingerol and 6-shogaol in ginger. 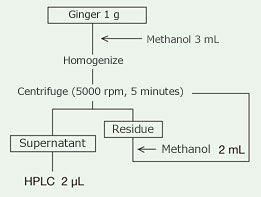