In response to demands for higher analysis reliability in recent years, efforts have been made to reduce the effects of temperature on the detector. In addition to refractive index detectors and electroconductivity detectors that are generally known to be sensitive to environmental temperature fluctuations, Shimadzu has led the industry by offering fluorescence and UV detectors that incorporate cell temperature-control.

With fluorescence detectors, temperature control of the cell is extremely important for improving the signal reliability. That is because fluorescence is subject to a thermal quenching phenomenon.

Baseline Stability
The UV detector is being used in the UV short-wavelength region in an increasing number of cases to detect more components. Generally, the absorbance of the mobile phase itself increases towards shorter wavelengths. The absorbance spectrum of the mobile phase changes with temperature and shifts in the wavelength direction (horizontally). The baseline becomes considerably unstable when detecting at wavelengths with a large absorption slope, in particular. With a UV detector incorporating cell temperature control, such as SPD-20A/20AV, the constant temperature of the liquid flowing into a cell prevents changes in the spectrum due to the mobile phase temperature and ensures stable analysis even at wavelengths with a large absorption slope. 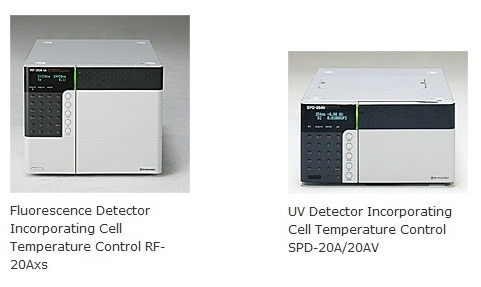