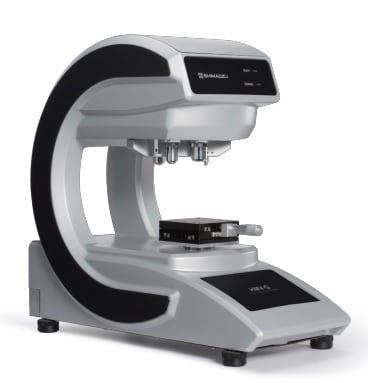 A micro Vickers hardness tester measures Vickers hardness at tiny test force levels. A regular quadrangular pyramidal diamond, referred to as an indenter, applies a force to a sample. The hardness of the sample can be calculated by measuring the indentation formed on the surface. This type of tester is used in a wide range of industries for inspections of steel, metal materials and mechanical parts, as well as for evaluation of surface improvements such as platings and heat treatments. In recent years, there has been a need for stronger data management, improved operability, and enhanced functions that suit the application.

The Shimadzu HMV-G30 / HMV-G31 series is compliant with measurements at low test forces in accordance with ISO standards related to Vickers hardness tests. Protective functions to heighten data reliability, as well as report creation functions, are also included. Additionally, a motorized micrometer for adjusting the position of the stage can be added, and a model equipped with a 5 megapixel color camera, the best in the industry, has been added to the series.

Features of the New Product

New functions limit unnecessary data editing, leading to better, more reliable data. For example, one function automatically records who is implementing the test, while another one requires the entry of a password when repeating measurements.

2. Compliant with Measurements at Low Test Forces, in Accordance with ISO Standards

The testers are compliant as standard with measurements at the low test force value of 1 g, in accordance with ISO6507-1 and ISO6507-2, standards related to Vickers hardness tests.

3. System Configurations to Suit the Objective

In addition to adding a model with a 5 megapixel color camera, the best in the industry, an optional micrometer for making motorized adjustments to the position of the stage can now be introduced. The system can be configured to suit the application and the user.