What is NIRS Neurorehabilitation?

NIRS neurorehabilitation is a rehabilitation system that combines a near-infrared imaging system (NIRS) with Shimadzu’s unique neurofeedback technology.
Due to its ability to present brain activity in real-time, the system enables efficient motor function training through the conscious control of brain activity. Consequently, it is expected to be much more effective than previous rehabilitation methods, especially for stroke patients.

In recent years, due to the changing environment in which people live, the number of patients suffering brain disorders, such as dementia, depression, and strokes, is increasing. In particular, dementia and stroke patients are known to have a high probability of requiring nursing care after the onset of the disease.
Currently, about 1.18 million Japanese are being treated for a stroke, with about 290,000 new cases per year (according to a 2014 Ministry of Health, Labour and Welfare patient survey). As Japan transitions to an aging society, there is concern that the number of people requiring nursing care due to a stroke will increase even further.
However, providing nursing care to patients tends to reduce their activity levels, which leads to even more nursing care being required. That makes it even more important to provide rehabilitation aimed at maintaining or improving patients’ motor and cognitive functions. Particularly with the declining birth rates in recent years, it is predicted that it will be difficult to secure adequate human resources to provide welfare and nursing care services. That means there is a need to institute rehabilitation methods that require as few human resources as possible.

Visualization of brain activity may be one possible way to rehabilitate patients more effectively, and NIRS is known as a system that can easily visualize brain activity. NIRS systems non-invasively measure variations in blood flow in the cerebral cortex, taking advantage of the high penetrability of light in the near-infrared region into the scalp and skull. Because it can measure brain activity while the patient performs routine tasks, it is often used for evaluating changes in brain activity during and after rehabilitation for restoring motor function.

Neurofeedback is a method of restoring or training specific brain functions by using a NIRS system or other brain function measuring instruments to show brain activity measurements or analysis results to the patient during rehabilitation tasks to enable them to consciously change their brain activity.

In rehabilitation involving movement of the hands, feet, or other locomotor organs, motor function improvement is promoted by establishing a connection between brain stimulation from a motor task and the corresponding sensation. In contrast, neurofeedback achieves stronger motor function training by displaying feedback of brain activity to patients as they imagine the intended movement (motor imagery) so that they can consciously control their brain activity by directly accessing functional networks in their brain.
Feedback to patients about changes in their brain activity is presented in a form that is intuitively easy to understand and holds their interest, such as using progress bars, intensity scales, or circular scales, which helps increase patient motivation for the motor function training.

① Assessment
In the assessment process, a physician diagnoses the patient’s motor function before and after training to decide what the training should include, judge the effectiveness of the training, and decide whether or not to repeat the training process.

This technology is a result of a joint research and development project, “Research and Development of Advanced Medical Devices and Systems for Future Healthcare,” funded by the Japan Agency for Medical Research and Development (AMED) and conducted in collaboration with Keio University, Osaka University, Kawasaki Medical School, and Morinomiya Hospital (AMED project number: JP18he0402257).
The system will next advance to the physician-led clinical trial* stage, under the direction of Professor Masahito Mihara at the Kawasaki Medical School, with the aim of putting it into actual use in healthcare facilities.

* This system is currently undergoing clinical trials in Japan and cannot be offered outside Japan.

The following products are relevant for neurorehabilitation. 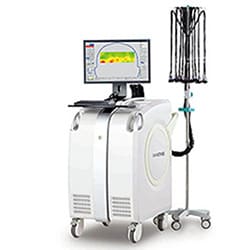 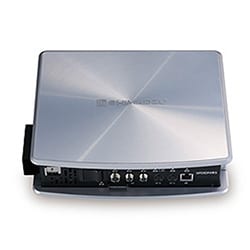 Back to Advanced NeuroTech