Mr. Yagi's group has several high-end LC/MS systems, in addition to NMR and IR analytical instruments, for conducting structural analysis of organic compounds. The Shimadzu LCMS-IT-TOF is one of the tools they are using for identification of impurities in the compounds. 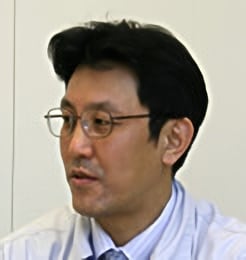 How is Shimadzu's LCMS-IT-TOF system being used?

These days, generic drugs are considered to be of "high quality and high purity." Purity is demanded for both drug ingredients and products. Since impurities of unknown structures will most likely be detected in LC analysis, and the source of these impurities cannot be determined at that stage, the objective shifts to structural prediction. Suppressing the generation of impurities becomes possible if the structure of impurities can be predicted, enabling the manufacture of high-quality drugs. Although we have used ion trap type MS instruments previously, our company selected the LCMS-IT-TOF for structural prediction of unknown compounds present at micro concentrations.

Why did you select the LCMS-IT-TOF as your final choice?

Value and performance. Since an FTMS would be an order of magnitude more expensive, even though it might be worth it, we honestly couldn’t spend that much. Once a budget was determined, it came down to performance, and our wish to obtain accurate mass and conduct MS/MS measurement in one measurement operation. We made a decision between your company’s IT-TOF and another company’s Q-TOF. Based on the best balance of performance and value, we selected the LCMS-IT-TOF.

So you made your selection based on careful consideration of cost and performance. Thank you. Regarding the actual conditions under which you are using the instrument, about how many people are using the LCMS-IT-TOF at your company?

We find that a group of 6 people can handle the required operations without the need for a group leader.

Instruments for conducting structural analysis have become fairly easy to use these days. The difference between this instrument and the ion trap that is conventionally used is accurate mass measurement, but aside from that, are there any other advantages or benefits you have found with the LCMS-IT-TOF?

Although this might not apply to every recent instrument, polarity switching is not possible with conventional instruments, and scan speed is slower compared to the IT-TOF. Since there is no way to know under which conditions measurement of an unknown compound should be conducted, that unknown compound may be detected in positive mode or in negative mode, making it very likely that the measurement will have to be repeated. Furthermore, though not a problem if it is the major component, when it comes to separating a component that makes up just 0.1% or 0.05% of the sample, a longer column becomes necessary, which increases the analysis time. With the LCMS-IT-TOF, measurement which previously required two runs can now be completed in one run. In addition, the ability to conduct accurate mass measurement is, after all, a big point. The most important factor is the ability to perform MS/MS accurate measurement with the IT-TOF. Since accurate mass can be determined for neutral loss, etc. when conducting structural analysis, it is now possible to see what is separated at that time.

Even with a neutral loss of only 28, if it is only determined as an integer, about three composition candidates can easily be considered, including CO, C2H4 and N2. So, the advantages can be listed as polarity switching, the ability to obtain MS/MS accurate mass spectra, and scan speed.
Next, what kind of LC analysis conditions do you normally use?

For the mobile phase, we use the typical solutions, such as aqueous formic acid, acetonitrile, TFA, etc. Perhaps we use formate mobile phases most of all. After we first verify separation using the LC method, we shift to the MS method. For a typical drug, a phosphate method is most often used. We also use ion pair methods, but since they cannot be used as is, we must change the conditions to search for those that will achieve the same level of separation. Although this is quite a time-consuming process, it is the first stage of our MS analysis. Unless we go through this process, even if we determine the structure of the eluted substance using MS analysis, once it is handed off to the analysis section, we will not know where the substance elutes using a different method. If this were actually to occur, determination of the structure would have no meaning. Since it is essential that we know that the substance which elutes at a specific position using a specific method has a particular structure, it is essential to first complete the task of developing a method that generates the same kind of results.

And there is a possibility that elution order may change if the method is changed.

That does occur. In such a situation, we look at UV spectra taken with a PDA detector, and verify the separation while looking for shifts of the target contaminant after changing the method. So, it takes quite a bit of time to establish the method before the process can move to the MS stage. Anyway, rather than having a shorter analysis time, it is preferable that the substances elute in about the same order. That’s because even if the retention times are slightly off, they can be moved.

For your department, specialized software or some solution capable of transferring a method to an LC/MS would be very useful. And it would be nice if the LC method could be used as it is in MS analysis.

Yes, that would be the best solution. There are supposedly MS manufacturers who claim that phosphate can be used, but I believe that is absolutely not possible.

May I suggest something? First, have you ever heard of the Co-Sense system? It is a system in which, for example, the phosphate mobile phase being used in the LC analysis is substituted for another mobile phase while trapping the peak. Do you think you might have some interest in such a system?

I have briefly seen such a Co-Sense system for NMR. Is the system you are referring to applicable to MS?

It is a system that prevents the phosphate buffer solution from reaching the MS. I would be pleased to show it to you if there is an opportunity.
The LCMS-IT-TOF system that you are using includes several types of software, such as composition prediction software and a program that compares chromatograms. Could you give me your opinion on the advantages of the data analysis software overall and any suggestions you might have regarding these products?

To tell the truth, I have not used all of these yet. I have used the composition prediction program of LCMSsolution.

Are the search result composition formulas of impurities listed in order of the highest probability?

Yes. I believe this is more or less the case.

Could you explain what kinds of advantages the LCMS-IT-TOF has in comparison to structural analysis using NMR and IR?

The biggest advantage is the ability to measure samples that do not consist of a single constituent. The fact that you can see components in their mixed state in a sample, even at low quantities, is a big plus. Greater quantities are required with NMR and IR, and unless it is a solitary constituent substance, you don’t know what you are looking at. Simply put, a sample consisting of a single solitary substance is not necessary. Plus, sensitivity is good, making it especially applicable for looking at micro levels of impurities.

So the workflow is to first convert the LC method into one that can be used for LC/MS, then measure everything by IT-TOF and obtain the predicted structure. And if the structure cannot be predicted by MS within that process, the process would be extended by collecting fractions and conducting supplemental IR and NMR measurement.

For structural analysis, you have MS, NMR and IR instruments. Among these, would you say that the LCMS-IT-TOF is the most frequently used?

Yes, that is so. Since it is at the most upstream position in the workflow, the analysis all starts with LCMS-IT-TOF measurement.

Yes, I believe it has become quicker. Previously, we had to first think about the composition formula to determine what it is, even if it had a large molecular weight. Now, it is possible to quickly narrow the possible composition formula candidates, allowing the process to quickly proceed to determining where and what kind of change has occurred, thereby speeding things up.

Are there any samples or measurement methods you would like to shift your attention to?

Up to now we have only been dealing with low molecular weight compounds, but I believe this could change. If we shift from low molecular weight compounds to antibody drugs and nucleic acid drugs, we will need to obtain the skills to address these substances. We can obtain good instruments if we spend as much money, but I think it is necessary for us to acquire the skills to handle those new substances.

If you have any final comments about the system as a whole, I would certainly like to hear them.

I think it is good that we acquired this system. At first, we talked about conducting measurement up to a certain point with the existing instruments, and then using the IT-TOF to obtain a little more detailed information to finish off the measurement. But actually, everyone seems to use the LCMS-IT-TOF from the start of the analysis if it is available: if unavailable, they use the old instrument because it cannot be helped. With the ability to obtain plenty of data and measure accurate mass, the work can be completed without having to repeat operations two or three times. It is considerably useful.

You have been using the LCMS-IT-TOF for about 6 months. How often have you performed maintenance?

We haven't had to do any maintenance at all. The maintenance we performed consisted of just wiping the source once or twice. During that time there were absolutely no problems with sensitivity, which remains stable without dropping at all. Also, the spray nozzle has never become clogged, and there has never been a problem of ions not emerging.

Finally, then, please share your opinions about our company's support, about us as an analytical instrument manufacturer overall, and if there is any other way in which we can help you.

It would be very helpful if you could provide service promptly. For example, if we call you in the morning, it would be ideal if you could arrive before noon, but I suppose it would be difficult for any company. I assume that there are still not enough people that can support the IT-TOF.

I also would like to increase the number of engineers for the LCMS-IT-TOF. The number of LCMS-IT-TOF instruments delivered to Europe, America, Asia and South America now outnumber those in Japan. Shimadzu is a Japanese manufacturer, and our engineers must at times travel abroad. As overseas engineers become more knowledgeable with respect to LCMS-IT-TOF, I believe the workload of Japanese engineers will decrease and service will be more promptly provided. 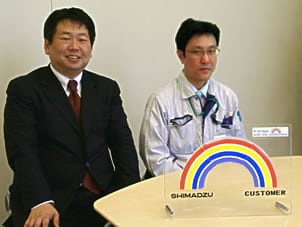 The 0.1-second high speed polarity switching which was mentioned as one of the salient features of the LCMS-IT-TOF was the most difficult hurdle the engineers faced in the development process. We once thought it was impossible to achieve polarity switching in just 0.1 second while maintaining high accuracy in both positive and negative modes. The members of the development team are extremely pleased and proud that this very feature has become the one that customers value.