The following is from an interview with Dr. Yamada of Ajinomoto Co., Inc. regarding the Prominence nano. He has generously provided advice and offered requests since the R&D stage and helped with commercialization. Dr. Yamada is currently involved in using a combination of micro-LC, nano-LC and various types of mass spectrometers to perform a wide range of qualitative and quantitative analyses of peptides and other samples. 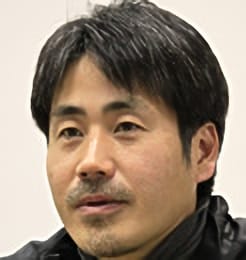 First, what are your reasons for using an LC/MS system and how do you decide whether to use nano-LC (Prominence nano) or micro-LC?

We use the system to analyze proteomes and peptides, or should I say peptidomes. Of the two Shimadzu LC units we have, one is used as a nano-scale system and the other as a micro-scale system. It is more an MS consideration, but we use nano-LC for MS units with stable electrospray at low flow rates and micro-LC for MS units that need to be operated at micro-scale flow rates. The LC/MS system with the nano-LC unit is used for qualification and relative quantitation using isotope-coded reagents. The micro-LC/MS system is used for quantitative analysis when we want to measure samples with more stable flow rate and spray conditions.

The reason we purchased the system was because we were involved with the Prominence nano from before it was released and the final product incorporated our needs. Our request was that non-specific adsorption to the system be prevented as much as possible, which is different than carryover. We asked that adsorption be kept as low as possible in valves and the autosampler and that flow lines be kept as short as possible. Using narrower tubing can lead to problems with clogging, so we asked for flow lines that provide a stable flow without clogging. Now we have almost no problems with clogging, so we can perform consecutive measurements without worry.

I assume you are handling samples and mobile phases very carefully, but do you keep them flowing continuously?

Yes, we keep them flowing continuously. That ensures stable flow with minimal adsorption, which provides reliable sensitivity. There are various ways to reduce carryover, such as rinsing, but rinsing implies there is something adhering to the lines, so it does not provide an adequate solution when detecting trace samples. Therefore, we always strive to avoid allowing any adsorption in the first place, which is presumably going well. That goes for both nano and micro systems. We are also careful to compare the current systems to the previous systems. The Shimadzu systems have higher sensitivity and more stable gradients. However, the other instruments we have are not the latest models, so they do not include flow feedback.

Thank you very much. What analytical conditions do you mainly use?

For nano-LC, we use a flow rate of 200 nL/min, whereas for micro-LC, we use 2 μL/min. We use monolithic columns for both. Trap columns are installed as well. We use the nano-LC (Prominence nano) system as a 2D system, so we installed a custom-made ion exchange column.

2D is used for extremely complicated samples or isotope-coded samples. 1D is used to measure trace quantities in relatively simple samples or to analyze a single protein in detail. Our buffer parameters are customized and use MS nebulizer tips that we make ourselves. The LC unit is durable, mostly maintenance-free, and can be operated for long periods, so it saves labor. By using a metal sprayer, measurements can be performed almost non-stop, which is easier psychologically as well. It takes a lot of extra work if it stops part way through. I understand that many people use 1D for most of their work and if 2D is required, they use ion exchange chromatography or other methods to fractionate the sample offline, then measure the fractions with 1D LC/MS. That might provide better resolution, but for applications like ours, where we are raising the performance level by using 2D nano-LC, an automated system that performs reliably is more important. The Prominence nano has really reduced the amount of work required.

I see. I am very happy to hear that.

The MS unit must be calibrated from time to time, but we are able to measure all day and night, for days in a row. For example, we often perform such continuous measurements over the New Year break. 2D measurements may be especially good in our case, because we acquire and analyze biological samples. Clogging during the first dimension is fairly unusual, due to the large scale of the column. If we started with nano scale, the slightest thing could cause clogging.

Do you tend to perform more 2D measurements?

Lately, we are doing mostly 2D. Occasionally, we switch to 1D and measure a standard sample to verify the performance level for maintenance purposes.

What advantages or disadvantages do you feel nano-LC provides compared to micro-LC?

Probably the biggest advantage of nano-LC is that it uses such small sample quantities and provides high sensitivity. It also uses less solvent. In fact, wasn't there a problem recently with acetonitrile? Anyway, the lower the quantities consumed, the better. In terms of disadvantages, one is probably the reliability of the systems. We have used a variety of LC systems since we introduced a capillary LC system in 1995, but the biggest problem has been clogging, stopping, and reduced flow rate. However, now that the Prominence nano system has solved those issues, the current Shimadzu system offers the utmost in reliability. Even the limited availability in column types can be addressed by custom-making our own. The only remaining disadvantage is its quantitative capacity. That applies not only to the LC unit, but also with quantitative capacity problems for the MS spray unit. It is a difficult issue, with our stance being to use micro-LC for quantitation, rather than nano-LC. The key factors for good quantitation are a stable flow rate and spray. Therefore, we think that micro-LC using an HPLC system with nano-LC capability can meet those requirements. In the future, we think quantitative analysis will continue to grow in importance, even in the field of proteomics.

What functions do you think should be added or performance improved?

Given the current form of HPLC, probably the only thing to add is higher speed.

Do you mean, high speed and high separation capacity? It is not a problem for the pump itself, but it is rather difficult with respect to the flow lines. Currently we use 360 mm fused silica capillary tubing with sleeve joints, but that seems to be the bottleneck. It's all about how to increase speed without sacrificing resolution capacity, but how much higher speed did you have in mind?

Since 2D takes so long, the faster the better. However, that would also involve scan speed on the MS side. Even if the current measurement time of 60 minutes remained 60 minutes, if it were possible to separate components that previously could not be separated, that would be extremely exciting.

I see. We'll study the issue, including the type of materials used.

Do you have any comments about LCsolution and its dedicated Nano-Assist control software?

Since LCsolution seems better suited to switching between 1D and 2D analysis, we have not used Nano-Assist very much at all. One thing we have noticed about using LCsolution for 2D analysis is that if the time for one dimension is shifted, the time for the other dimension has to be shifted as well. That seems a little inconvenient. If that could be automated, I'm sure it would make it easier to use.

Actually, one of the reasons we have Nano-Assist is because I personally wanted to improve just such features. Customers in the life sciences, who were not originally LC users, seem to think Nano-Assist is easier to use. Of course, we'd love to include such features like automatic incrementation in LCsolution, where features are linked as a function of time, but we'll have to consider that as an issue for future versions of LCsolution.

In addition, you also use an AccuSpot MALDI plate spotting system, don't you? Do you have any suggestions for making improvements?

The bottle volume for the matrix solution seems big.

We could probably make it narrower if the matrix solution is regularly purged and maintenance is performed. However, the crystallization from natural drying of the matrix would not change no matter how narrow or wide we make it. That may be unavoidable, but we also think there is a back pressure problem. We are working on modifications to the extent that there would be no back pressure.

I also want to ask how you decide when to use AccuSpot and when to use MALDI-MS and LC/MS.

We use AXIMA MALDI-TOF MS for analyzing relatively large molecules and AccuSpot when we want to analyze more thoroughly with a single valence. In the case of substances such as glycopeptides, for example, a variety of sugar chains can attach to the peptides, so trying to view them with LC/MS can become very complicated. Not only are they varied, but also they have multiple valences. Since they elute at the same time, multiple peaks overlap with each other. If MALDI-MS is used to analyze such substances, it only shows the mass peaks of the sugar chains. Therefore, for such samples, we use AccuSpot and AXIMA.

I think the fact that Shimadzu products are compact, space efficient, and consume less solvent is also a strength.

I suppose so. Personally, I think another factor, which is a strength, is Japan's strict attitude toward manufacturing. Even when listing specifications in product catalogs, we only indicate very conservative values.

I think Shimadzu is especially that way. I suspect you have quite strict internal screening standards. Therefore, even if you have the technology and can make a product, it takes you a long time to commercialize it. But, I suppose that is important for ensuring instrument reliability.

I suppose so. We try our best to commercialize products as quickly as possible, while taking into consideration speed and other specifications. Thank you for providing so much time with us today. 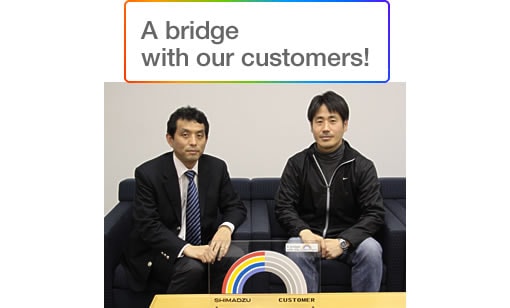 Comments from an engineer on development of the Prominence nano

Since nano-LC, and particularly 2D measurement, requires such a long time for analysis, it is important that the system can be operated in a stable and reliable manner for long periods. To achieve such a system, we developed a unique delivery system that combines the stability of a split system with the low solvent consumption of a direct system. In addition, we developed a clog-resistant nano-valve with dead volume reduced to nanoliter levels by significantly changing its shape and mechanism and by using precision machining technology. In terms of making the overall system easier to operate, we designed Nano-Assist software to allow even first-time LC users to perform 2D analysis easily. When developing instruments, we are sometimes not aware of the operating environments and analytical conditions that will actually be used. However, this wonderful system is the result of implementing many requests and suggestions for improvements offered by Ajinomoto Co., Inc. Thank you very much.