Multilayer film is often used for food product and pharmaceutical wrapping films. The most common method used to qualify the components in each layer of multilayer film is to slice off cross sections of the film and use an infrared microscope to measure the resulting samples with the transmittance method. Using this method, if the film is about 10 µm or thicker, then the spectrum of each layer can be measured.

In this example, a microtome was used to slice film cross sections with thickness set at 10 µm. The resulting section was placed on top of a diamond cell and compressed, then measured using an infrared microscope. Fig. 1 shows an enlarged photo of the section before being compressed. Fig. 2 shows an enlarged photo of the section after compression. Spectra for each of the seven layers in Fig. 2 are shown in Fig. 3. Based on the absorption in each spectrum, the first layer is probably polyethylene terephthalate, layers 2, 6 and 7 are probably polyethylene, layer 3 is probably Nylon, and layers 4 and 5 are probably ethylene vinyl acetate. 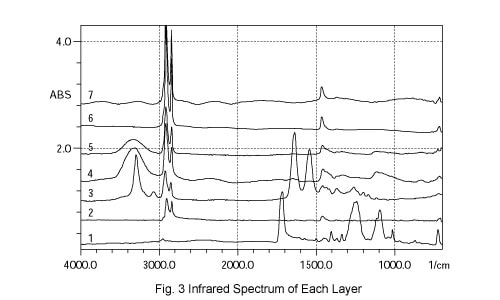 An FTIR spectrophotometer is mainly used to estimate the structure of organic compounds.
This instrument shines infrared light onto the molecules, which absorb infrared radiation equivalent to the interatomic vibrational energy of the atoms comprising the molecules. It then estimates the structure and quantifies the compound by investigating this IR absorbance.
By combining an FTIR spectrophotometer with an infrared microscope, it can even measure microcontaminants down to about 10 µm.