Increasingly high performance engineering resins are being developed for use in a wide range of fields, such as the automotive industry, consumer electronics, office automation equipment, for their various functional characteristics. Some of the criteria that have become especially important for evaluating the performance of such materials is impact resistance and its associated material properties, such as strength and rigidity. In addition to evaluating materials in terms of conventional static tensile strength, highrate tensile strength, longitudinal elasticity, and strain measurements up to the breakpoint are expected to become important new parameters for materials development. This example describes testing the highrate tensile strength of a flat plate specimen of ABS resin and measuring strain up to the breakpoint. Images of the high-rate tensile test were captured with a high-speed video camera and image analysis software was used to measure the strain between gauge length on the specimen.

Images of the ABS resin specimen (4 frames) before and after breakpoint during the high-rate tensile test are shown in Fig. 1. In this example, the recording speed was 32 kfps. The interval between frames was 32 microseconds.

Fig. 1 Four Frames of Specimen Before and After Breakpoint

A time history of strain between gauge length is determined by using image analysis software to analyze the images obtained. In this case, gauge length was specified longitudinally 30 mm apart on an image of the specimen not moving (16 consecutive dots apart at the center of the specimen), then that gauge length was automatically tracked as a function of time to measure the longitudinal strain. The resulting time history of strain obtained is shown in Fig. 2. In addition, a time history of stress measured by the highrate tensile testing machine or external data logger can be displayed simultaneously as well. Furthermore, images are displayed synchronized with strain and stress in terms of time. This tensile test example resulted in a tensile strength and breaking strain of ABS resin that was 70 MPa and 30 %, respectively. 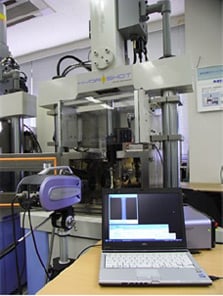