● Introduction
Rubber materials are very widely used in industrial parts and general merchandise, taking advantage of the mechanical properties of elasticity and flexibility that are most characteristics of rubber.
There are many types of rubber, including natural rubber, which has been used in industrial applications since the early 1800s, and various types of chemically-produced synthetic rubber, which have become more and more common since their introduction in the 1900s.
This Application News introduces an evaluation of the most characteristic properties of chloroprene rubber, tensile strength and elasticity. Chloroprene rubber is one of the most widely used synthetic rubbers, primarily due to its excellent weather resistance, oil resistance, as well as heat resistance.
As a guideline, the tests were conducted following the operating conditions described in the JIS K6251 method (vulcanized rubber tensile test method), which is applied for the evaluation of mechanical properties of general rubber.
For the testing apparatus, the Shimadzu Autograph AG-X precision universal tester was used (Fig. 1). 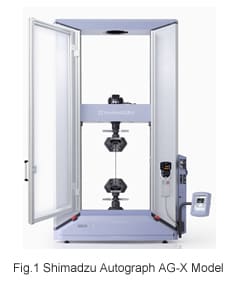 ● Test Specimen and Test Conditions
The sample and test conditions used in this test are as follows. 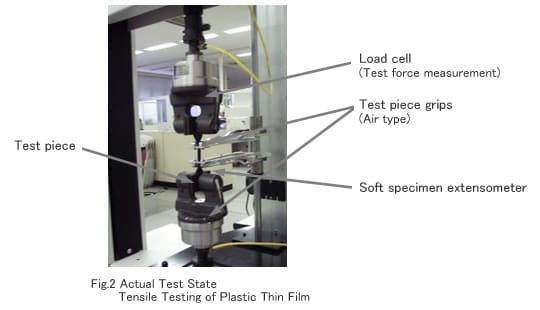 In order to measure sample strain directly, an extensometer suitable for soft samples (SES-1000 model) was used, and the distance between the gauge marks up to the point of breaking was measured in real time.
As indicated in the load conditions, the tensile test results are shown as a stress – strain relationship (S-S curves) in Fig. 3 for the 5 samples. (The result of each sample is shifted in equal intervals in the overlay display.) 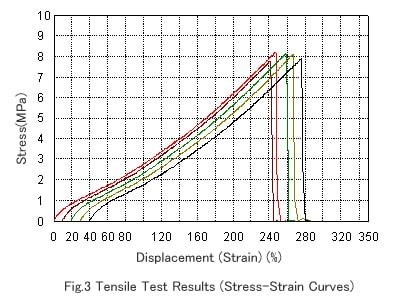 The curves demonstrate stable results with good reproducibility, both qualitatively and quantitatively. (The horizontal axis shows the measured tensile elongation between gauge marks using an extensometer.)
From these data, the typical characteristics are obtained as average values of the 5 test pieces, as shown in Table 1. Here, “100% Tensile Stress” and “200% Tensile Stress” indicate the stress when the strain between the gauge marks is 100% and 200%, respectively.

The Shimadzu Autograph AG-X is a testing apparatus that features excellent performance and ease of operation, and can be used to conduct mechanical property evaluation over a wide range of fields, not to mention those described in this testing example.
In addition, various jigs (grips, etc.) and extensometers specific to the test specimen, as well as temperature controlled baths in which the testing environment temperature can be freely set, can be flexibly combined to suit widely varying requirements.

Note) This Application News test example was conducted using JIS test conditions, however, it does not conform strictly to the conditions in every detail.

* Please be advised that data obtained before the implementation of the current Weights and Measures Law may be presented in terms of gravimetric unit.