Recently, eutrophication has progressed in Japan in such lakes as Biwako and Kasumigaura, resulting in algal blooms that can cause a social problem. The blue-green algae that form algal blooms can be toxic; in some countries, cattle have died after drinking water from a lake where an algal bloom has occurred. Microcystins are typical toxins (hepatotoxins) contained in algal blooms. They are cyclic peptides comprising seven amino acids. Over 50 types are said to exist. Microcystins LR, YR, and RR are typical types that exist in Japanese lakes. This section introduces the analysis of microcystins by HPLC and LC/MS, according to the 2001 revision of the Drinking Water Test Methods. 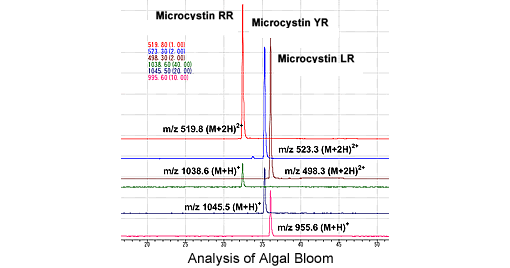