With the abolition of the Japanese Provisional Measures Law on the Importation of Specific Refined Petroleum Products in March 1996, the concentration of methanol, MTBE (methyl tertiary-butyl ether), benzene, and kerosene (equivalent to 14 times the total content of n-C13 and n-C14) was prescribed. Four different gas chromatography measurements are prescribed as analytical methods for these controlled components in JIS K 2536-1996 (Liquid petroleum products -- Testing method of components).
"Total components testing method by gas chromatography" is introduced below. 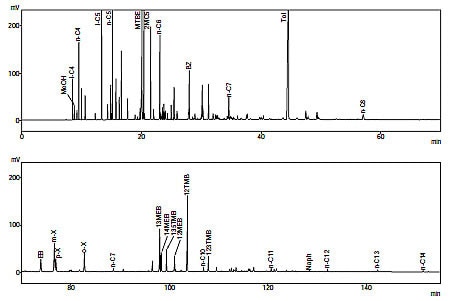