PONA analysis is the analysis of hydrocarbon mixtures by separation and quantitation of fractions according to the carbon number or type of hydrocarbon. Analysis can be performed on hydrocarbon types including naphtha, a primary ingredient of petroleum products; gasoline automobile fuel; reformed gasoline (reformate), which is a base ingredient of gasoline, and catalytically cracked gasoline (FCC gasoline).
PONA is an acronym for Paraffins, Olefins, Naphthenes and Aromatics.

Analytical standards include the fluorescent indicator adsorption (FIA) method (JIS K-2536) for determining aromatic (A), olefinic (O) and saturated (S) hydrocarbons by type, but this method has the disadvantage of a long analysis time and vulnerability to human error. PONA analysis by capillary gas chromatography utilizes a non-polar chemically bonded capillary column with a high theoretical plate number to separate constituent hydrocarbons into as many peaks as possible. It then identifies each peak and obtains quantitative values according to the number of carbons and hydrocarbon type. PONA analysis features quantitation of olefins at sub-percentage levels, quantitation of individual components in addition to type identification, and calculation of mean density and mean molecular weight.

The analysis of an FIA standard sample is shown below. 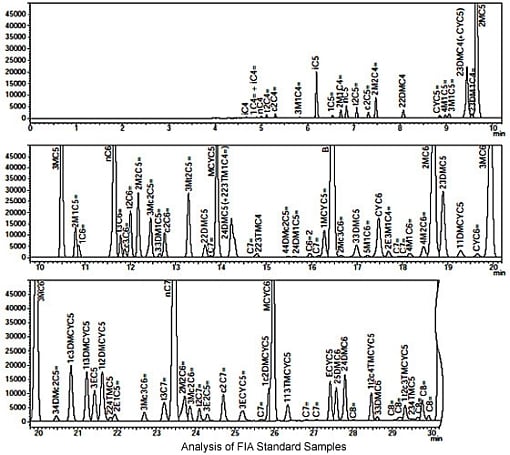